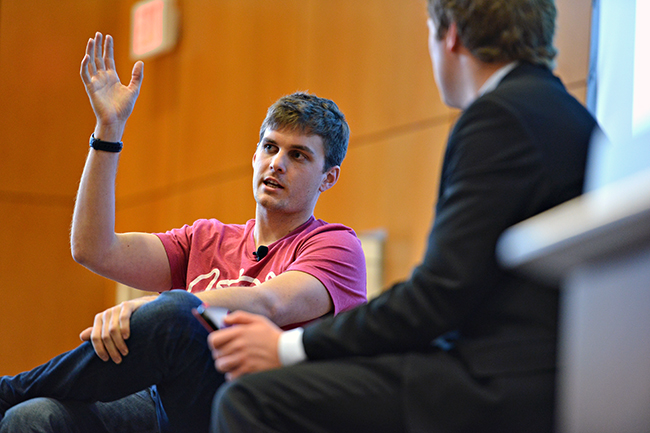 Yik Yak co-founder and CEO Tyler Droll discussed the app’s success and the double-edged sword of online anonymity at a talk Wednesday evening.

Droll said he had the idea for Yik Yak after being frustrated with trying to come up with a Twitter username and gain followers.

“What if I got rid of the usernames and instantly gave you followers?” Droll said.

Droll said mainstream social platforms are limited because users judge posts based on who posted it, not just the content of the post.

“We wanted more of a level playing field,” Droll said. “Our whole generation is moving to more ephemeral apps.”

Droll credits the app’s success to anonymity and the lack of user registration. Because each user has an equal voice and audience, Droll said the app allows users to easily build community, and he claims the app will even allow users to respond quickly in emergencies.

“When there is a school shooting, word will spread faster through Yik Yak than Twitter or campus alert systems,” Droll said.

“I think they’re a company that is at a very interesting point in terms of growth,” Watts said. “They’re in a place where they’ve had the initial wave of people that are interested, and now they kind of have to prove themselves — prove that they are capable of staying relevant.”

Some students who attended the event raised questions about the abuse of anonymity on Yik Yak. One such problem, cyberbullying, led the Yik Yak team to use user location to block the app in high schools.

Finance senior Kate Hanna said she has been personally affected by gossip on the app.

“I think it’s sad that one piece of gossip can be taken campus wide,” Hanna said. “I think that affects more than just high schoolers.”

Droll said the tone used in Yik Yak communities is overall much friendlier than that of competing apps, such as Secret and Whisper, due to guidelines and moderation.

The app curbs harassment and false threats using a system that prompts users to reconsider before posting content with words such as “kill,” according to Droll.

“Students will post stuff on social media and not think that the police will try and track them down,” Droll said. “Students should be careful, especially now that you register your phone number on Yik Yak.”