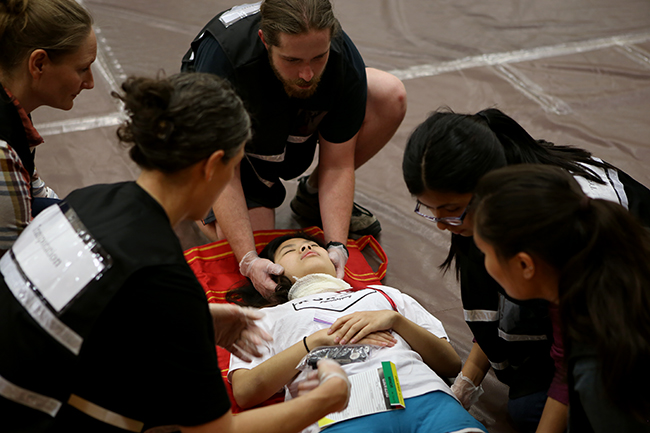 In light of recent safety threats around the U.S., the School of Nursing and School of Social Work will make improvements to their spring disaster drill to improve its authenticity, according to Dede Sparks.

“The fact that we’ve had a hurricane that just came up through Mexico, big fires in Bastrop and multiple school shootings and threats has really raised the bar for medical professionals and their need to be prepared,” Sparks, a clinical assistant professor in the School of Social Work, said. “We talk to our students about actually being that first responder in these situations and we are making improvements to accurately mimic them.”

Improvements include the addition of students from the College of Pharmacy and potential involvement from EMS services, according to Shalonda Horton, assistant professor of clinical nursing.

“We are trying to foster more collaboration, so we hope to bring on pharmacology,” Horton said. “This is a vital addition because in the event of a real disaster, nursing students, social work students and pharmacy students would help run the shelters that the city would set up.  We are also working to bring in EMS services, so when [the mock disaster] unfolds here, it will carry over to Breckenridge and Seton.”

These changes are partly a result of recent disasters in the news that brought attention to the need for extended training and preparation, according to Sparks.

“I feel like there are disasters that are happening throughout the nation and they’re making students worried especially at a big university like this one,” Ramirez said. “Now with campus carry being passed, I think that tension is building around the idea of shootings and human disasters, or even natural disasters. This drill makes the community feel more comfortable.”

“We’ve noticed that the community wants to become active participants in the mock disaster,” Todd said. “We’re getting emails from students that want to directly participate and we have increased the number of students that participate in the social work’s missing persons and family crisis centers. It is really beginning to become something that is community wide, which is great.”