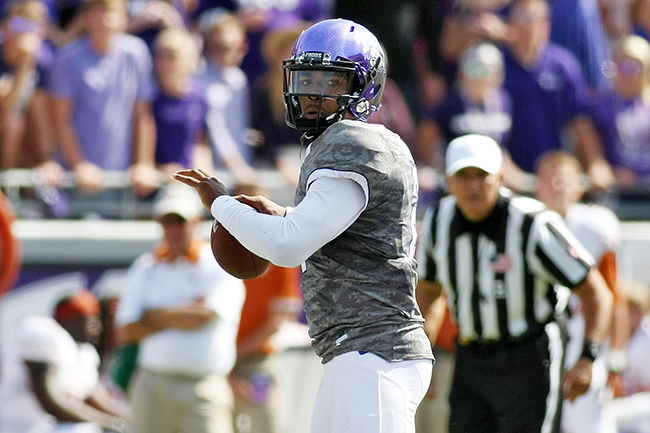 It wasn’t his best performance, but Fournette still sits atop most Heisman watch lists after Week 8. He averaged 5.8 yards per carry against Western Kentucky and scored one touchdown in LSU’s easy win. Fournette isn’t putting up the mind-blowing numbers he was earlier in the season, but I don’t think it’s because he’s slowing down. He’s still great at finding holes, evading defenders and putting up consistent numbers. The bye week will give him a chance to rejuvenate before LSU battles Alabama on Nov. 7.

The Horned Frogs didn’t have a game last week. This could work in their favor as they play a team that nearly upset them last season. West Virginia isn’t very good at defending the pass, and Boykin and the Horned Frogs will definitely use that to their advantage. I expect Boykin to come out and have another Heisman-quality performance after getting some rest.

Tennessee almost knocked off Alabama last week, but fortunately for the Crimson Tide, one of the best players in college football is in their backfield. Henry struggled in Week 8, but he still managed to run for 143 yards on 28 carries. He scored the only two Alabama touchdowns in the game, including a 14-yard, game-winning score. He showed off his elusiveness, acceleration and ability to read a defense in the game. Alabama’s bye week came just in time as it gets ready to face LSU.

If you didn’t know already, you do after the 58-0 win over Miami — Clemson is a very good football team this season. Watson’s consistent production is a big reason why. Against Miami, he racked up 241 yards of total offense and two touchdowns — one passing and one rushing — and had just four passes hit the ground. His completion percentage is one of the highest in the nation, and he runs Clemson’s offense extremely well. Baylor quarterback Seth Russell’s season-ending injury may be what triggered me to finally put Watson on this list, but he definitely belongs here.

In my mind, Ward definitely belongs somewhere in the Heisman conversation, but since Houston is a lesser-known school, I’m going to call him a wild card pick. He’s a dual-threat quarterback who boasts 15 rushing scores — tied for best in the nation with Fournette — and a top-five completion percentage. He had a rough start against UCF last week but still ended with 256 total yards of offense and two scores without playing in the fourth quarter. As Houston starts gaining a following, I think Ward’s Heisman campaign will, too.