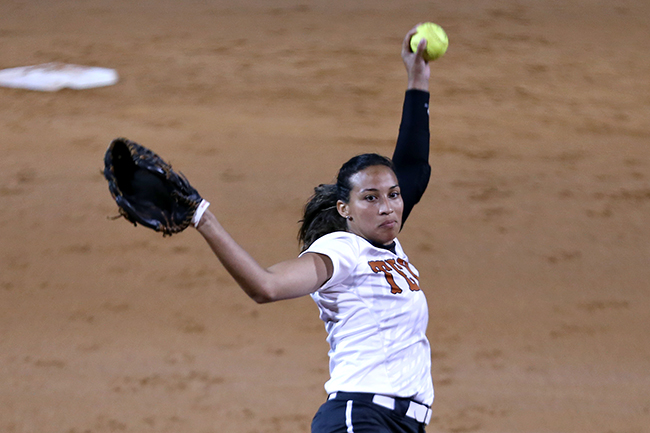 On the arms of a trio of pitchers and five runs to back them up, the Longhorns remained undefeated in the fall season.

Head coach Connie Clark had a mission and felt the team eventually came around to it.

“We’ve been trying to work on North-South stuff,” Clark said. “We want to set up our strike zone by avoiding the too high and too low stuff.  We were chasing pitches at the beginning but we got settled down and started making better contact.”

The offense had five runs on nine hits, which seemed more than enough for the win. But in the top of the 5th, the Rattlers loaded the bases with no outs. Junior pitcher Tiarra Davis, in her third inning of work, held a meeting at the mound and second baseman Stephanie Ceo gave her the right words.

“I just told her to calm down and focus,” Ceo said. “We had a couple times tonight where players needed picking up. and I feel like I can help with that after being around for a while.”

Davis escaped the jam with just one run on one hit and that was all the Rattlers would get on the night. The leadership Clark talks about all the time was exactly what the team needed in that moment.

“Tiarra got in a little bit of trouble, but I told her she didn’t realize how big getting out of that was,” Clark said. “Our leadership is becoming very evident on the field. That’s huge for me as a coach to see.”

With the win, the Longhorns are now 5–0 in fall play and await back-to-back action next Thursday and Friday night against St. Edward’s and Texas State.