‘Our Brand is Crisis’ fails to find strong identity, despite some respectable performances 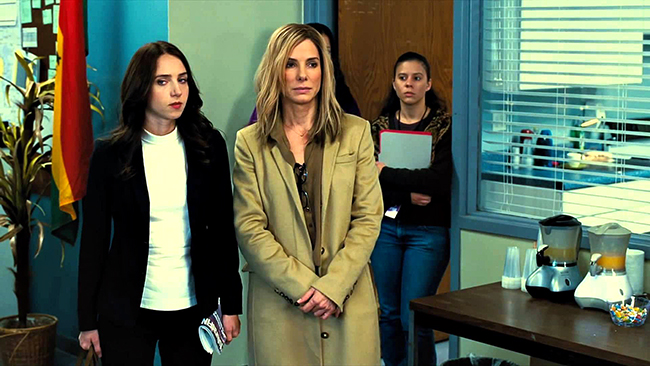 “Our Brand is Crisis,” inspired by a 2005 documentary tackling U.S. political involvement in the 2002 Bolivian presidential election, shows director David Gordon Green doesn’t have a clue where he wants it to go.

In one moment, it offers a humorous take on the sleazy underbelly of presidential elections by using ridiculous stereotypes and over-the-top slapstick. Then, it attempts to deliver a dramatic, somber exploration into how the political “game” ignores the plight of actual, suffering people. Green’s constant switching between these two scenarios during the film becomes exhausting, and diminishes Sandra Bullock’s strong performance and the genuinely funny moments the film possesses.

Jane Bodine (Bullock), a once-famed campaign strategist famous for getting the unelectable elected, has retired and taken refuge in a mountain-side cabin. That all changes when Ben (Anthony Mackie), who represents a political consulting firm, invites her to help them elect an unpopular ex-president of Bolivia. Jane’s progress in making him popular becomes threatened as she finds herself head-to-head with rival strategist Pat Candy (Billy Bob Thornton), who represents her employer’s strongest opponent. Now, Jane must use her unorthodox methods to secure the election while also internally debating the ethics of what could happen to the country after getting her candidate elected.

Usually, films centered on elections provide intense stakes and relatable characters who keep the audience invested, despite political jargon such as poll numbers. “Our Brand is Crisis” fails at this, as it only briefly hints at the stakes and doesn’t take the time to make them seem important. Sure, it shows the struggles of the Bolivian people, but Green only has the characters say how politicians’ actions affect their lives rather than actually showing it. Certain concepts, like a tax bill that the candidates will have to face when elected, come off as just scary-sounding, intangible objects.

The character aspect is also mismanaged. Bullock’s take as the irreverent, manic Jane is funny and manages to liven up a sluggish first act, but it’s hard to take her seriously as a political shaker capable of moving mountains. She does work well off of Thornton, who remains the most enjoyable aspect of the movie with his charming, yet sleazy personality.

Mackie drowns in his disinteresting character as the political consultant rep, as do the rest of Jane’s team. The actor that breaks through the clout of poorly-written campaigners is Zoe Kazan, a researcher Jane hires to find dirt on her opponent. Her sarcastic tone and the sheer cool intelligence of her character give her staying power that matches Bullock and Thornton’s.

When the film undergoes a personality change to dark comedy, the results tend to be pretty humorous. One scene demonstrates just how far Candy will go to sabotage Jan’s campaign, including getting a driver to slam into a poor llama just to sabotage a simple campaign commericial. The jokes, such as Jane getting back at Candy by mooning him, don’t get less crude but they serve as a good distraction from the film’s half-hearted, grim-faced moral about the evils of politics.

“Our Brand Is Crisis” attempts to cobble together a story of dirty politics and tries to alternate between funny and serious. Green proves he knows how to make immature humor work effectively but could have used his skill to make a truly mocking satire on political culture.

Instead, he crams in a boring morality tale about how politicians will seek their own interests rather than serve the people. Bullock’s charming performance does little to help a poor, unfocused script. Considering the award-winning documentary on which the film is based, Green’s fictional reimagining stands as a pointless story about the deadly political game.