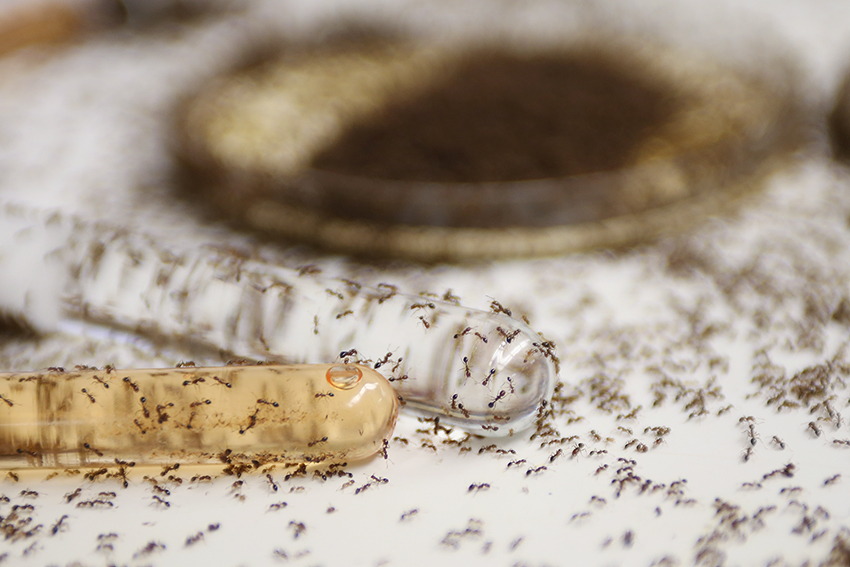 Editor's note: This is one part of a three-part Science Scene in celebration of Halloween. To see the other two parts, click here.

People watching zombies take over the world on screen are probably unaware that similarly horrifying creatures are lurking in the real world.

Several species of insects, bacteria and fungal parasitoids have developed creepy mechanisms to ensure their species’ survival: body-snatching and — unlike true parasites — eventually killing their hosts. Such parasitoids can hijack their host’s hormonal or neurological pathways, turning their victims into incubators or bodyguards for their young — obedient servants that researchers have denominated “zombies.”

Daniel Bolnick, UT professor of integrative biology, said parasitoids can manipulate their host’s physiology and behavior to increase their own chances of survival.

“Parasites are often manipulating the host,” Bolnick said. “But the host isn’t dead while that manipulation is happening, so the zombie bit is an analogy.”

The phorid fly is one such parasitoid that turns its host, the fire ant, into a “zombie.” The phorid fly hovers above a swarm of ants. Once it chooses a victim, the fly dives and injects an egg into the ant’s thorax.

The egg will swell up rapidly to protect itself from the ant’s immune system before developing into a fly larva. Eventually, it’ll move through the ant’s neck into its head, feeding on the ant’s innards. After eight or ten days, the fly will manipulate its host to leave its colony for a dark and damp place, a suitable environment for the developing phorid pupae. The fly will then decapitate its host and wait a few more days before flying out of its safe shell in the ant’s head.

Phorid flies belong to a class of parasitoid that manipulate a host’s behavior to protect themselves from danger in their most vulnerable stages — so-called “bodyguard manipulation.”

Other zombie-creating parasitoids have a complex life cycle. Schistocephalus solidus, for example, is a kind of tapeworm that starts its life infecting a small crustacean in a lake, which is eaten by a fish, which is then eaten by a bird. The tapeworm reproduces inside the bird, and its eggs are defecated into the water, beginning the cycle anew.

The tapeworm manipulates the behavior of its intermediate host — infected fish become more likely to swim alone and less likely to flee from predators — making it easier for the next host in the chain, a bird, to consume them.

“The main imperative of the parasite is to get to the next host,” Bolnick said. “From the parasite’s perspective, when it’s in the fish it needs to get eaten by the bird.”

A third category of parasitoid manipulates its host to move into an alien habitat they require to complete its life cycle. The horsehair worm normally lives in water, but hatches and grows on land inside a cricket. Once it has reached maturity, the worm compels its host to jump into the nearest body of water and drown itself where the parasitoid is free to swim off in search of a mate.

Finally, some parasitoids rely on an array of carrier hosts to spread to their final host. Toxoplasma gondii, a single-cell parasite that reproduces in the intestines of house cats, can infect the brains of other warm-blooded animals to make them more likely to seek out cats. T. gondii alters the brain chemistry of rats, for example. Rats would normally find the smell of cat urine terrifying, but T. gondii-infected rats find it attractive instead, making them extremely easy to hunt.

T. gondii can also infect humans, though its effect on the human brain remains uncertain.

“The crazy cat lady stereotype might have a parasitological basis.” Bolnick said. “That might be Toxoplasma gondii manipulating a cat owner to like cats and take care of them.”