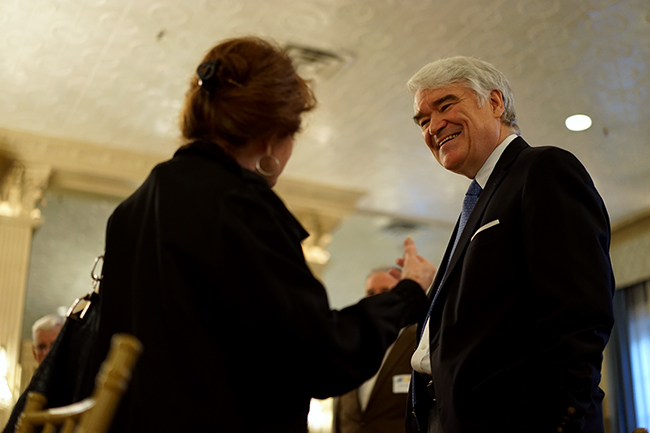 Nathan Hecht, chief justice of the Texas Supreme Court, argued state officials must abide by even the most controversial federal court decisions at a talk Thursday morning.

In a conversation with Texas Tribune editor-in-chief Evan Smith, Hecht said the Constitution requires federal judges to remain independent of partisan stances on issues such as same-sex marriage in order to remain accountable to the people.

“The problem here is we want judges to be independent and we want public officials to be accountable,” Hecht said. “You’re trying to balance independence and accountability, and they conflict. The balance for federal judges has been struck very far on independence, and the accountability we leave to their conscience.”

This past June, the US Supreme Court dismantled prohibitions and state constitutional amendments banning same-sex marriage around the country in a landmark 5–4 decision. Texas Attorney General Ken Paxton issued a statement shortly after the ruling urging local officials to withhold issuing licenses if they are opposed to such unions for religious reasons.

After the Supreme Court decision effectively legalized all gay unions around the country, opponents of gay marriage have criticized the Supreme Court for its ruling, arguing that courts should stray from having a “loose” or “living” interpretation of the Constitution.

Hecht, an elected Republican official, argued he personally believes in a more “strict” constitutional interpretation, arguing that the amendment process to the Constitution should remain with the people.

“The argument that we should adhere closely to the text is the stronger argument,” Hecht said. “The problem with the living Constitution is that it lives differently in your mind, in my mind. When that happens, then in essence what you’ve done is let individual judges amend the Constitution.”

First-year law student Rebecca Chang said she agreed with Hecht’s opinion on the supremacy of Supreme Court rulings, even those as controversial as the June same-sex marriage decision.

“He’s completely right in the sense that once they’ve made a ruling, we’re bound by it, the states are bound by it,” Chang said. “I know our state is traditionally one-party, but you have to follow the Supreme Court’s ruling.”

Blaire Plain, a sophomore at Austin Community College, said students should be more involved in the judicial process.

“I think students should pay attention to any government election, including the judicial election process,” Plain said. “We actually have the ability to make changes since there are so many young adults in America.”