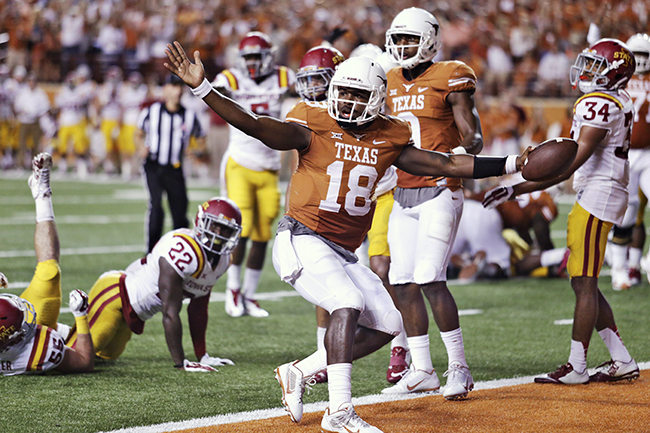 The Longhorns struggled throughout the game. Texas’ offense managed to generate 204 offensive yards but only picked up 11 first downs.

Texas’ defense started off slow, and the Cyclones took advantage. Iowa State cashed in a 66-yard, 11-play drive with a three-yard touchdown run by freshman running back Mike Warren to give it a 7-0 lead. The Cyclones extend their lead to 10-0 with a 28-yard field goal at the end of the first half.

Iowa State scored a touchdown on a 19-yard pass from redshirt sophomore Joel Lanning to wide receiver Dondre Daley. The Cyclones added another touchdown with a one-yard run from Joshua Thomas.

The Longhorns made it within the Iowa State red zone but couldn’t score and were shutout.

Saturday’s result marked the first loss to the Cyclones in Ames and only the second ever loss to them.

Texas struggled on both sides of the ball as the offense was held to 98 total yards. The Cyclones took advantage of the Longhorns’ defense early in the game. Iowa State cashed in a 66-yard, 11-play drive with a three-yard touchdown run by freshman running back Mike Warren for a 7-0 lead.

The offense began to find its footing in the second quarter when Texas inserted junior quarterback Tyrone Swoopes in the “18 wheeler package.” Swoopes churned the Longhorns to midfield with 21 yards rushing and 11 passing yards, but the drive stalled when redshirt freshman quarterback Jerrod Heard threw an interception.

The Cyclones added a 28-yard field goal to push their lead to 10-0 near the end of the half.

The Longhorns are searching for their third consecutive win, which would bring their record back to .500.

Iowa State is in the midst of some big changes. The Cyclones dismissed offensive coordinator Mark Mangino and named redshirt sophomore quarterback Joel Lanning their starter Monday. Iowa State will look to validate its changes.