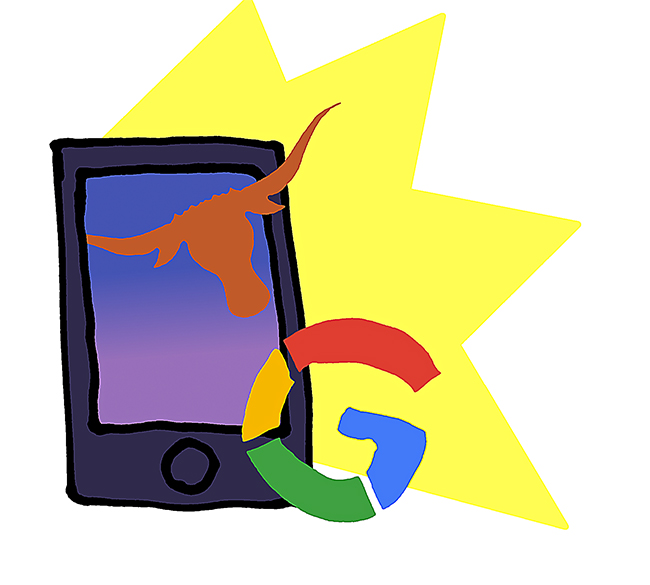 Even tech employees sometimes feel guilty about how phone screens have replaced conversation. Last Friday, Google launched a new app at UT called Who’s Down, which is meant to get people off their phones and hanging out with their friends.

Who’s Down users can swipe to indicate that they have some free time they would like to spend with friends. After that, they can see which of their pre-approved “friends” are interested in hanging out. They can also specify what activities they want to do; the automated examples include “Get Torchy’s” or “Go for a run at Gregory Gym.”

The app was released Friday to four student groups at UT-Austin on Friday: Alpha Delta Pi sorority, the Filipino Student Association, Sigma Alpha Mu fraternity and campus Desi dance groups. Justin Oliver, product marketing manager at Google, said the team deliberately chose UT-Austin because of its size and diversity, as well as the culture and warm weather of Austin which allows students to be outdoors year-round.

“We looked at a lot of different student groups and universities all across the country,” Oliver said. “This is an unconventional Google launch, and we want the UT students to build it with us.”

Christian Gonzalez, a user experience researcher at Google, said he conducted survey research that asked people whether they were content with the amount of time people spent with their friends. This research showed that people wished they could spend more time with their friends but were unable to make that happen.

“Presumably, if everybody wants to get together with their friends a little bit more, that should be easy to make happen,” Gonzalez said. “But what we uncovered by talking to people was that there’s a lot of socially awkward situations that come up when you ask people if they want to spend time with you.”

Gonzalez said he hopes Who’s Down will simplify the logistics of socializing. He also talked about how people are often bothered by group messages when they are busy, a problem the app hopes to solve.

“We tried to think of a way to make asking people if they wanted to hang out not awkward and not direct, so you don’t feel as vulnerable to rejection when you take that jump,” Gonzalez said. “I think that it’s going to be really great for people who aren’t the alpha planners in their social group.”

Many of the new users expressed enthusiasm about the app, although some wondered whether it would have more to offer than current messaging apps.

“I think it’s going to be a great way to get in touch, easier than group messaging,” business sophomore Pooja Patel said.
Journalism and geography senior Madeline Goss said she was excited about the app.

“I’m always the person to text my friends and say, ‘Come hang out with me!’ so this is awesome,” Goss said.

The students in these groups have a certain number of invites to the app that they can share with others. The invitations contain a verification code, which users must enter in order to download the app. The Google employees said they plan to launch the app to the wider public once they have received user feedback from students.

Employees at Google said they want to measure success through more than app downloads or the amount of time users spend on the app.

“What we really want to measure is if people are getting together more,” Gonzalez said. “Are they having better relationships with their friends? Are they having more fun with the groups of people they care about in real life?”