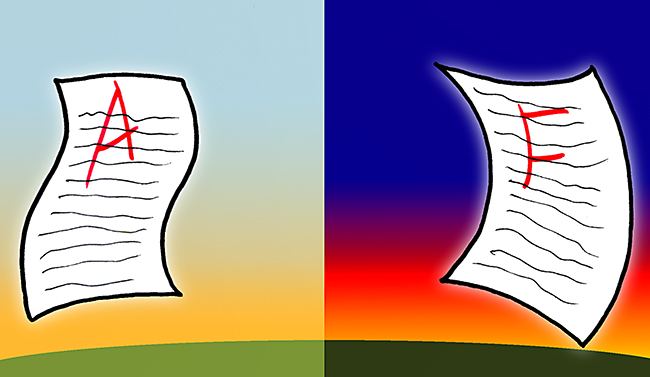 Escaping from the early morning rising times required in high school may seem liberating, but students might want to think twice before scheduling classes with late start times.

Later class times may lead to slightly lower grades, according to a 2012 study by researchers at St. Lawrence University. For every hour after 8 a.m. that students’ classes started, their GPAs fell by about .022 points.

Participants with later classes got around half an hour more sleep per night, which surprised researchers — more sleep usually correlates with better grades.

To make sense of the results, they proposed another variable with a much more substantial correlation to class times — alcohol use. Students with later class times reported a much higher rate of alcohol use than those with earlier classes.

“Later class start times seemed to change the choices students make: They sleep longer, and they drink more,” said Pamela Thacher, co-author of the study, in a press release.

Thacher said she hypothesized students who have earlier classes tend to go to bed earlier, whereas those with later classes feel like they have more time to go out and socialize and drink. In the study, Thacher proved students whose classes started later reported more binge-drinking behavior.

Jessica Wagner, manager of health promotion at University Health Services, said she agreed with Thacher’s speculations. She said having morning classes on a Friday has been demonstrated to be a protective factor against high-risk drinking on Thursday nights.

“If students know they need to get up early for class on Friday, they are more likely to be more moderate in their drinking behavior,” Wagner said.

Thacher said the average increased use of alcohol by people with later classes could offset the benefits of slightly more sleep by decreasing the quality of the sleep itself.

“This in turn might affect their ability to engage, intellectually, with their coursework,” she said in the press release.

Alcohol reduces quality of sleep, according to the UT Counseling and Mental Health Center. The CMHC recommends limiting the intake of all stimulants and depressants before sleeping. Wagner said alcohol interferes with the sleep cycle, leading to disturbed sleep, which is less restful.

Although statistics may show a slight link between lower grades and later classes, Wagner said the best class start times are ultimately up to individual preference.

Music junior Correa Moises said he prefers early start times because they allow him to end his day early.

“I like getting my classes done so that I have time in the afternoon to study and chill and get stuff done,” Moises said.

Other students, such as theatre junior Kay McGuire, prefer later class times. McGuire said she prefers later class times not because it allows her to go out more, but because she can have a more relaxed morning routine.

“I like to have coffee and do homework in the morning,” McGuire said. “Rolling out of bed and going to class is not my favorite.”

Overall, when registering for classes, the study suggested it is important for students to consider factors that can affect their grades, such as class times, sleep quality and alcohol use, but they should also take their own preference into consideration.