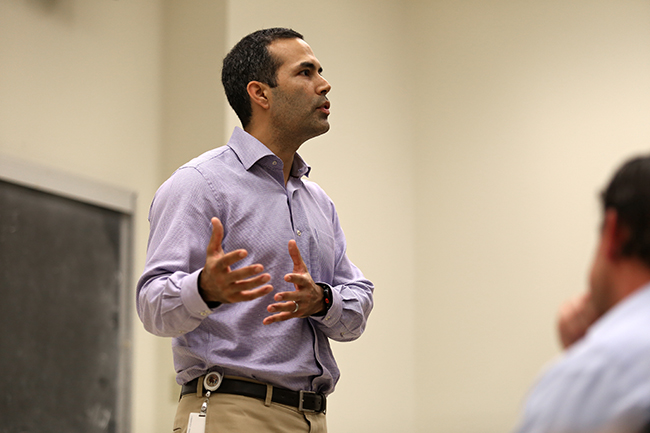 George P. Bush, a UT alumnus who was elected Land Commissioner in 2014, said his father’s campaign platform speaks to the issues millennials care about the most, including reforming the “broken” health care system and social security.

“Many in our generation believe that we’re more likely to see a UFO than a social security check,” George P. Bush said. “It’s time to put the politics aside and the party labels aside and do what’s necessary to reform these institutions.”

Jeb Bush plans to reform entitlements and clear up the tax code by lowering rates and decreasing the number of tax brackets from seven to three, with individuals taxed at 28, 25 and 10 percent, the lowest tax rate for the highest income earners since the Reagan administration, according to the campaign’s website.

“Opportunity only comes in a country where, if you want to start your own business, … the spending structure in Washington actually enables you to go out and do that,” Stephanie Carlton, a policy advisor for the Jeb Bush presidential campaign, said. “If we don’t take action, then we’re going to lose that.”

On health care, Jeb Bush’s plan would move more control over to the states by making their insurance markets more competitive and would reform the Food and Drug Administration’s regulatory policies, according to the campaign’s website.

“When you think about Obamacare — the Affordable Care Act — premiums are going to go up $600 for each person in the country on average next year,” Carlton said. “You all will feel the brunt of that with an even higher amount for people between the ages of 18 and 24.”

Government sophomore Crystal Sandoval, a supporter of Jeb Bush, said the speakers gave a good representation of the campaign’s platform and how it relates to the issues millennials care about, such as immigration reform.

“I personally can attest to the whole immigration reform and things like that because that’s something I care about as a Hispanic,” Sandoval said. “This was very informative to students who are unaware of the issues that are going around campus and … how the Bush campaign will be able to address those issues specifically.”