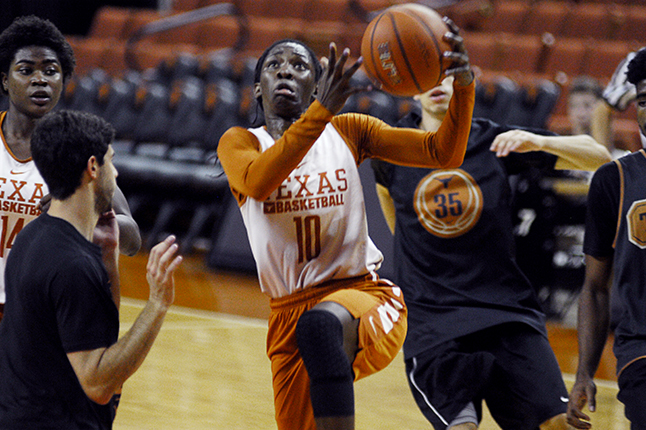 The Texas women’s basketball players broke the huddle with a collective shout of “All in!” before heading to their locker room at the Frank Erwin Center after Wednesday’s scrimmage against their male practice squad.

Their men broke the huddle with them after claiming a 76-75 victory in the scrimmage.

“The guys we played today are pretty good,” Aston said. “If our players continue to try to compete against these guys, it makes the game a little easier on game day.”

It took Aston’s team, who was wearing white, nearly three minutes to make its first bucket. But, Aston said the team is poised for an offensive breakout this season.

“I think we’re capable of scoring many more points than we did last year,” Aston said. “We’re shooting the ball better, and I think our guards are making better decisions.”

The white team fell behind 76-61 after the first three 10-minute quarters. But the group re-energized for the five-minute fourth quarter.

They rattled off 14 straight points before freshman forward Jordan Hosey released a last-second heave from half court just after the buzzer.

Higgs, the No. 7 recruit in the class of 2015, said she has confidence in her ability to be a threat offensively every night. When asked what her role will be on her new team, her answer was simple.

In spite of her scoring prowess, Higgs said she needs to work on deciding when to take a step back and stay under control.

“I have to learn how to change pace, how to start and stop,” Higgs said. “But I’ve always played [with electricity].”

Aston said Higgs tends to get down on herself after committing a turnover or forcing a shot.

“She needs to go from play to play and not worry about what just happened,” Aston said. “That’s the hardest thing for young players. The game is so much faster.”

But the Longhorns struggled to score at times even with Higgs’ offensive bursts.

Senior center Imani Boyette said the team will figure it out as the season progresses.

“We’re still searching for our identity,” Boyette said. “We just want to play hard, be a better offensive team and always lock it down on defense.”

Boyette was named to the All-Big 12 First Team last season as she led Texas to its first Sweet 16 appearance since 2004. The Longhorns lost to eventual national champion Connecticut, 105-54.

“Our motivation is 50-point losses,” Boyette said. “I don’t think I need to say anymore on that.”

Boyette and the No. 12 Longhorns look to get rid of the taste of defeat against UTSA on Nov. 14 at home in their season opener.