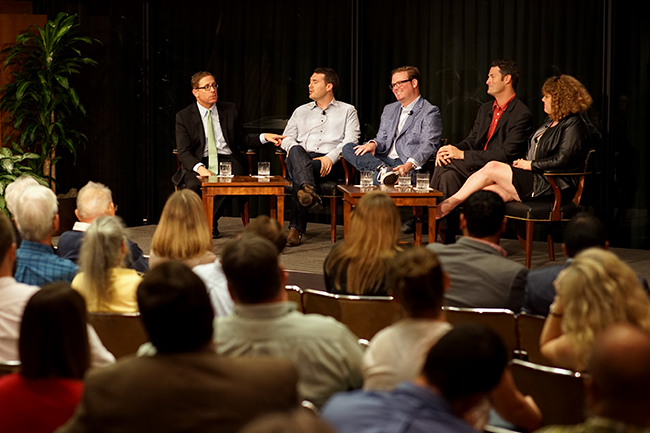 Four presidential campaign advisers discussed the state of the presidential election and the effects of digital media on the 2016 landscape with Texas Tribune editor-in-chief and CEO Evan Smith on Thursday.

The campaign consultants, made up of three Republicans and one Democrat, debated the relevance of national polls and the extent of their effect on party primaries at the LBJ Presidential Library.

Simonds said she believes the successful nominees in both parties will win through a strong digital campaign focusing on social media and data.

“You can not have a strong campaign without digital, both from a messaging perspective and for motivating your voters,”
Simonds said. “I think from all the campaigns we’ve seen on the Republican and Democratic side, the strongest
campaigns will be the ones that focus on digital.”

Harris said the use of national polls in determining which  candidates get to stand on each debate stage has disadvantaged some Republican candidates and said he believes early states are more important in predicting election outcomes.

“It’s the early states that are going to determine the rest of the election,” Harris said. “It’s not voters in California and Florida, even who are being counted equally in these surveys.”

Marcos Duran, public affairs graduate student, said he believes there is a value in national polls, but agreed that there should be a bigger focus on the early states.

“I actually went to campaign in New Hampshire for Obama in 2008, and as you saw, him winning Iowa gave him a huge boost,” Duran said. “I agree that [national polls] shouldn’t be overemphasized, the way I think it is now, but they shouldn’t
be discarded.”
The analysis and conversation on the presidential campaign was put on as part of the LBJ Library’s Future Forum, an initiative of the library to encourage members to engage with each other and learn about public policy through speaker events and discussions, according to Future Forum founder Catherine Robb.