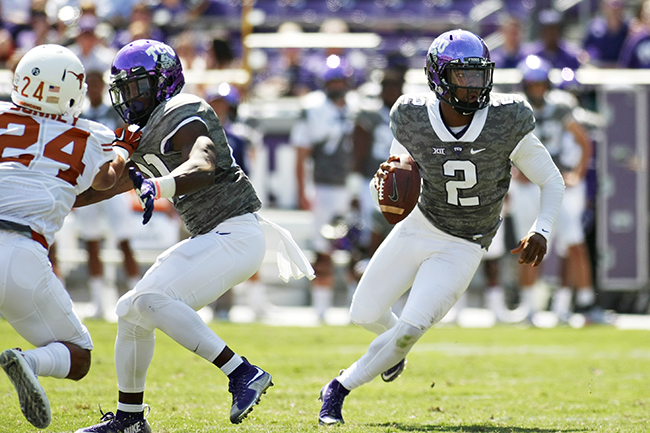 The Tigers didn’t play last week, but their game this weekend is huge. Alabama’s rushing defense is ranked third in the nation and will challenge Fournette. He’s averaging 7.7 yards per carry and has rushed for at least 150 yards in every game this season. His physical running style will have to be turned up to 11 to have that success against the Crimson Tide. If Fournette can put up good numbers in Tuscaloosa, his Heisman frontrunner status will be further solidified.

Yes, I think Fournette is the best running back in the nation, but Henry is a close second. He’s incredibly physical as a runner and is a workhorse for the Tide. He doesn’t put up the consistently big numbers like Fournette, but he’s averaging a solid 5.8 yards per carry and knows how to step up when needed. The outcome of this game could have big implications on which of these running backs has the best chance at hoisting the trophy come December.

The first set of college football rankings has Clemson sitting in the top spot, and although those are far from set in stone, they say a lot about how people view the Tigers. Clemson is rolling, and Watson’s play is a big reason why. He was great last week against North Carolina State, throwing for 383 yards and five touchdowns with just seven incompletions. Watson is running Clemson’s offense well, and if he can keep leading the Tigers to wins, then he could be in New York for the trophy presentation.

Considering the Heisman’s reputation as a quarterback award, Boykin has a good shot at the trophy. His play is consistent and he’s leading one of the best — albeit increasingly underrated — teams in the nation. He accounted for four TCU touchdowns with three in the air on 388 passing yards last week, but the Horned Frogs have a tough game this week. If Boykin can put TCU over the Cowboys, he’ll get himself and his team back in the national spotlight.

The four players at the top of this list are heavy hitters for the Heisman, but Ward and the Cougars are improving each week. The nation is starting to pay attention. Houston shut out Vanderbilt last week, and Ward’s performance was quiet but efficient. He finished 15-of-23 with 221 yards and scored two touchdowns — one passing and one rushing. Start watching this team if you aren’t already, because Ward has the ability to take it a long way.