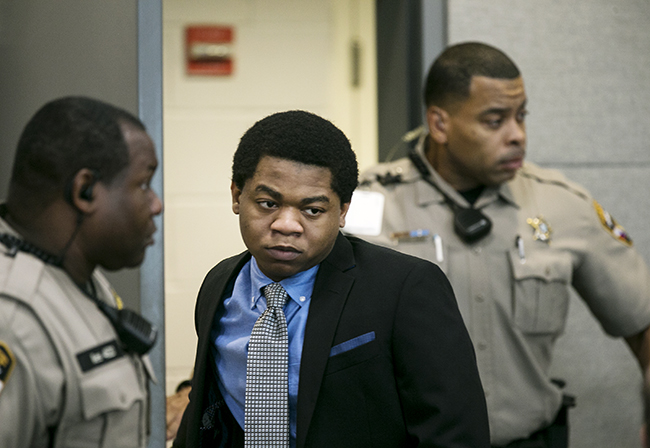 An Austin jury has convicted Rashad Owens of capital murder from the 2014 South by Southwest Music Festival crash.

The judge initially set aside three weeks for the SXSW crash trial. It only took one to reach final deliberations.

Owens was sentenced immediately after the verdict was read and will spend the rest of his life in prison without the possibility of parole.

Owens was charged with killing four people and injuring more than 20 others by drunkenly driving through a barrier and into a crowd of people downtown.

Capital murder charges were initially filed after Jamie West, 27, and Steven Craenmehr, 35, died at the scene. In the two weeks after the crash, DeAndre Tatum, 18, and Sandy Le, 26, died as a result of injuries sustained as a result of the crash.

Prosecutors and defense attorneys rested their case Thursday afternoon, with the defense not calling a single witness to stand during the trial, according to a report by KVUE.

To convict him of capital murder, the jury believed he intentionally or knowingly killed people when he evaded police that night.

Meredith Bradley, a witness to the incident, said Monday that Owens drove into crowds gathered on Red River Street at high speeds without regard for the people he was impacting.

“He was just driving super, super fast and whipped into that turn without stopping,” Bradley said. “He just whipped into that crowd of people. You just saw those people being mowed down. The first victim got tossed around like a rag doll.”

As Owens stood for his first day of trial Monday, Owens’ lawyers said he had never intended to kill anyone and only began driving off-route when he panicked while being pursued by police.

According to Owens’ defense attorney, Russell Hunt, Owens was visiting Austin the weekend of the crash to perform with a rap act. He had been driving a car he had borrowed to pick up a lost friend, and had his headlights off when the police tried to pull him over.

After the crash, Austin City Council approved a full-scale review of SXSW, including safety procedures, street closures and crowd management, on March 27.

A post-event survey conducted by the Austin Center for Events revealed that 49 percent of the 850 respondents attended SXSW events unregistered. Fifty-seven percent of the respondents also voted against the city working alongside the Texas Alcoholic Beverage Commission to limit the amount of hours that alcohol is served during SXSW events.