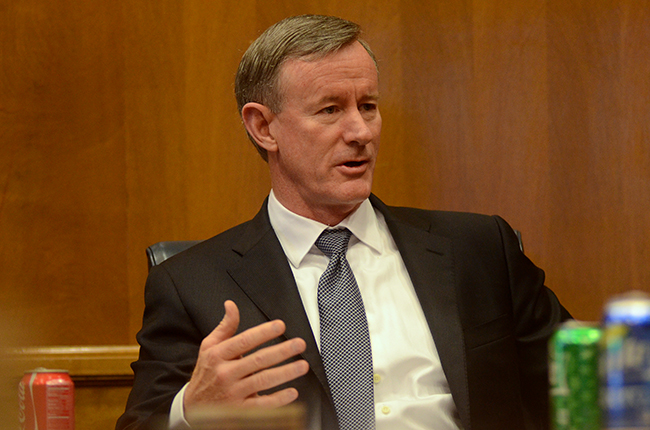 McRaven, a former Navy SEAL credited for leading the mission to assassinate Osama Bin Laden, said he wants to drive collaboration throughout the UT System using his experience as a leader of multiple units in the military. McRaven, who has been in office for less than a year, said the System has been conducting a strategic assessment of the system’s academic competitiveness since May.

The information discovered serves as a basis for ways the System must improve, McRaven said.

“Today, I come prepared to show you how the UT System will use our size, our talent and our diversity to solve the difficult problems that face us,” McRaven said. “A rigorous and disciplined process will help us prioritize our efforts.”

The Board of Regents approved a plan on the first day of meetings to develop a campus of approximately 332 acres, south of the UT Health Science Center at Houston. McRaven said a task force has been formed to assess the options for this property, but for now the land should be open to all UT institutions.

“It will have a footprint that will hopefully be very similar to a university,” McRaven said. “We don’t know what that property is going to be, but it is an opportunity for us to have access into Houston and tap into energy, aerospace and medical [fields]. I would like to see it as an intellectual hub to bring all the campuses to Houston.”

As part of the strategic assessment, McRaven said all institutions will adopt the “Rooney Rule” to diversify the faculty. For senior-level positions such as dean or higher, the position cannot be filled without interviewing a qualified woman or minority candidate sometime in the future, McRaven said.

“What was clear is we need our faculty to reflect more of our student population,” McRaven said. “Where we are now, we have a very large Hispanic population. We are doing a great job serving the Hispanic community, but our faculty does not necessarily reflect that. This will take decades to begin move the needle, but if we don’t start now, our faculty won’t look too much different.”

Student regent Justin Drake said he appreciated the boldness of McRaven’s speech and his dedication to leadership across the System. Drake said this was the first time he heard about UT’s version of the “Rooney Rule,” but UT is heading in the right direction.

“Faculty diversity has been really acknowledged as being poor,” Drake said. “I think one of the numbers I saw up there for African-Americans was pretty disappointing and in terms of gender equality, it’s also disappointing. It will draft a lot of criticisms, but at the same time it reinforces UT’s dedication to diversity.”