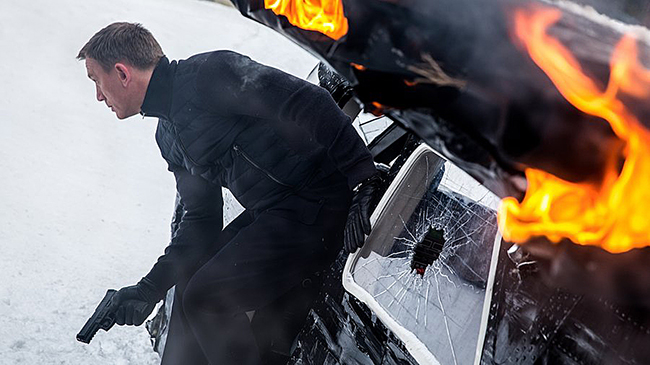 Daniel Craig’s James Bond has always been less refined and more grounded than his predecessors. Ever since 2006’s “Casino Royale,” Bond studio Eon Productions has offered a refreshingly modern take on the British super spy. With “Spectre,” the studio attempts to return the series to its over-the-top action, cat-loving supervillain, high-tech gadget, sex-obsessed roots. And it misses the mark.

Directed by “Skyfall”’s Sam Mendes, it lifts classic Bond elements from previous films, yet never makes a statement of its own. That’s a shame, because “Skyfall” concluded promising a reinvigoration of the series. “Spectre” is a direct sequel to that movie and pits Bond against his greatest enemy yet: Franz Oberhauser (Christoph Waltz), the mysterious head of an organization called Spectre.

Bond dispatches one of Spectre’s top assassins in a phenomenal opening action sequence that takes place during the Day of the Dead in Mexico. It begins with a long tracking shot before giving way to a frantic chase through a costumed parade and climaxes with a battle aboard a helicopter that Bond flips not once, not twice but three times. The stunt is real and it’s thrillingly executed.

“Spectre” never again matches the opening scene’s momentum as Bond continues his investigation against the new M’s (Ralph Fiennes) orders.  Armed with new toys from Q (Ben Whishaw), Bond travels to Rome, Austria and Tunisia in search of Oberhauser. Along the way, he enlists the help of Madeleine Swann (Lea Seydoux), the daughter of his old nemesis Mr. White (Jesper Christensen).

Meanwhile, M is embroiled in a political struggle against C (Andrew Scott), a government official who wants to create a global intelligence network and close down the 00-section. C seems like a naive upstart, but there’s more to his machinations than meets the eye.

“Spectre” promises an explosive and dramatic journey, but only makes good the explosive part. While fun and mildly engaging, most of the action scenes are unremarkable, lacking the ferocity of the brawls in “Casino Royale” and the stylish urgency of the set pieces in “Skyfall.” A car chase between Bond and Spectre henchman Mr. Hinx (Dave Bautista) amounts to nothing more than one sports car chasing another in a straight line through empty streets. Later, Bond escapes the bad guy’s base so easily that it seems the filmmakers got lazy and just wanted to end production.

Craig is more chipper as Bond now. He’s funny and suave, recalling the glory days of Sean Connery and Roger Moore. Unfortunately, he’s tied down by convention in “Spectre” after leading the series in a fantastic new direction.

The script isn’t as smart as it should be, even though it’s written by Neal Purvis, Robert Wade, John Logan and Jez Butterworth. It includes all the Bond tropes without creating something imaginative or exciting out of them. The dialogue is serviceable. It isn’t clever and is sometimes cheesy, and the missed opportunities are infuriating. In one scene, M says, “Now we know what C really stands for.” The audience at my showing laughed uproariously at this ingenious line. Until it was squandered when M qualifies it with: “Careless.” The audience replied with a groan.

Oberhauser is one of the movie’s strongest parts, as well as one of its weakest. He poses an indomitable threat to Bond and Christoph Waltz’s affably evil take on the character simultaneously excites and frightens. But Oberhauser’s motivations are murky, his connection to Bond is contrived, and his actual identity is incredibly obvious.

Mendes and the writers try to connect “Spectre” to Craig’s previous outings, but as they were never created with the Spectre organization in mind, it comes across as a shoddy attempt at universe building and the filmmakers never properly explain how Quantum and Silva tie into Oberhauser’s grand plan.

“Spectre” doesn’t come close to matching the bar set by “Skyfall.” It’s a misjudged return to formula for a character that had just been reinvented, and while it isn’t terrible, it doesn’t impress either. Bond has saved the world 24 times — the filmmakers will have to do a lot more than rehash his old adventures to propel the series forward.