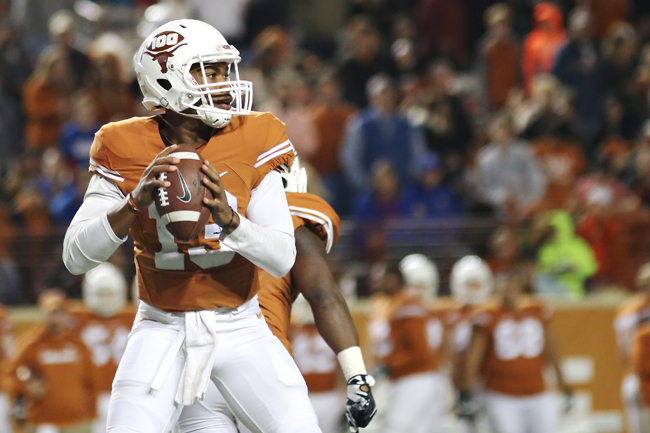 Texas annihilated Kansas, 59-20, Saturday night at Darrell K Royal-Texas Memorial Stadium. The offense exploded after it imploded against Iowa State last week and was shut out.

Heard again and not again

Freshman quarterback Jerrod Heard started the game having not thrown for more than 100 yards in four straight games. He ended that streak on his first three pass attempts. Heard’s first pass was an 84-yard spiraling laser to freshman wide receiver John Burt. Burt broke a tackle and scored to give Texas a 7-0 lead. Heard’s second throw was a 37-yard completion to sophomore wide receiver Lorenzo Joe. After starting out 2-for-3 with 121 yards, he completed four of his next nine passes for just 22 yards. He had good plays and bad plays. With a Kansas player wrapped around his legs he tried to pass the ball. He fumbled. He finished 13-for-23 for 201 yards and one touchdown.

A tale of two halves

Head coach Charlie Strong’s alter ego “Chuck” must have have made an appearance in the Texas locker room at halftime. Texas only led Kansas 24-14 at intermission. In the third quarter, Texas scored 14 points — both came from the legs of sophomore running back D’Onta Foreman. His first touchdown run was Texas’ highlight of the night. Forman took a handoff and didn’t stop until he reached the end zone 93 yards later. His second touchdown was a 9-yard run. Kansas didn’t score a point in the third quarter and trailed 38-14 when the third quarter ended.

Jayhawks soar more than they should

The Longhorns’ offense gave a show after it laid an egg in a 24-0 loss to Iowa State last week. Texas scored 52 points Saturday night. The 59-point outburst is the most points Texas scored all season and its most since 2012 when they put up 66 points in a win against Ole Miss. Big plays led to the Longhorns’ outburst. Texas scored on an 84-yard touchdown pass, a 44-yard touchdown run and a 93-yard touchdown run. The Longhorns offense didn’t sustain drives well in the second quarter, thanks to Kansas defense providing pressure to Heard. In the second half, the Longhorns were able to protect the quarterback better and that helped Texas sustain drives and rack up points.

Texas fans can be happy and joyous that Texas annihilated Kansas by 39, but at the end of the day, it’s still Kansas. The Jayhawks were 0-8 before they arrived in Austin. Considering Kansas’ defensive woes, this win should probably have an asterisk next to it. Texas improves to 4-5 on the season with the win, but its next opponents — West Virginia, Texas Tech and Baylor — will present more of a challenge.