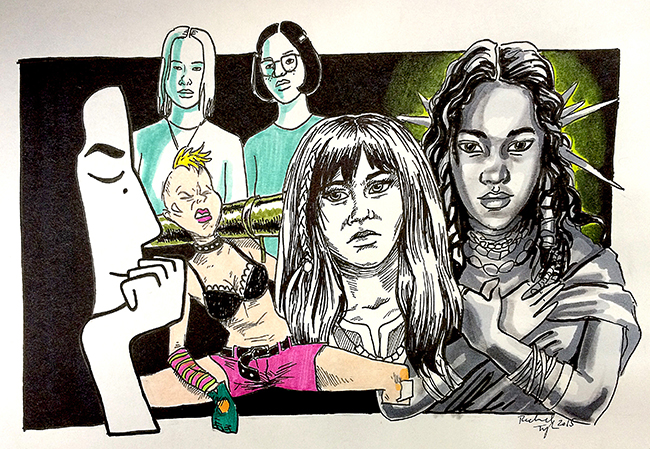 Throughout their journeys through various galaxies, revolutions and high school, the leading ladies of these five comic and graphic novels serve up spunk, angst and personal growth. Through various mediums and storytelling styles, the writers and illustrators of these works create honest, powerful female narratives.

“Niobe: She is Life”
Written by Amandla Stenberg and Sebastian A. Jones
Illustrated by Ashley A. Woods
Co-written by Hunger Games star and social activist Amandla Stenberg, “Niobe” tells the story of a half-elf, half-human warrior on an epic journey of self-discovery. Set in the fantasy world of Asunda, Niobe’s character is largely based off of Stenberg’s real-life personality and coming of age experiences — although Niobe also balances saving the world. Niobe must deal with an oppressive prophecy and vengeful devil as she fights to unite nations and blaze her own trail. The project hopes to increase readers’ exposure to dynamic female characters of color. The comic book was released earlier this month and is part of an upcoming nine part series.

“Persepolis: The Story of a Childhood”
by Marjane Satrapi
Marjane Satrapi’s graphic memoir “Persepolis” captures her youth in Iran during the Islamic Revolution. The beautifully illustrated black and white comic strips, accompanied by Satrapi’s humorous and honest storytelling, capture the confusion and growing pains involved in childhood. The novel provides an intimate look at life during the revolution through the lens of a rebellious Satrapi during ages 10 through 14. The novel is followed up by “Persepolis 2,” which encompasses Satrapi’s later teenage years. In 2007, both graphic novels were converted an Academy Award-nominated animated feature by the same name.

“Tank Girl”
Written by Jamie Hewlett and Alan Martin
Illustrated by Jamie Hewlett
The Tank Girl comics, first published in 1988 in the UK, follow the zany misadventures of beer-guzzling, chain-smoking heroine Tank Girl. The comics are set in post-apocalyptic Australia, complete with a kangaroo-human hybrid boyfriend named Booga. After accidentally shooting a decorated officer, Tank Girl becomes an outlaw who both drives and inhabits a tank. With her gruesome personal habits and frequent hair dye, Tank Girl became an 80s counterculture icon of female empowerment. The comics were adapted into a 1995 film, which received terrible reviews by critics and has since developed a cult following.

“The Diary of a Teenage Girl: An Account in Words and Pictures”
by Phoebe Gloeckner
The semi-autobiographical “Diary of a Teenage Girl” follows the teenage years of Minnie Goetze, a 15 year old growing up in San Francisco in the 1970s. The novel’s unique hybrid form of both written and comic passages paints a brutally honest picture of Minnie’s young adult experiences, including unpleasant sexual encounters and a dysfunctional family life. The novel, told from the first person as Minnie’s diary and sketchbook, presents an intimate, and at times tragic, coming of age tale. "Diary of a Teenage Girl" was adapted into a feature film released earlier this year.