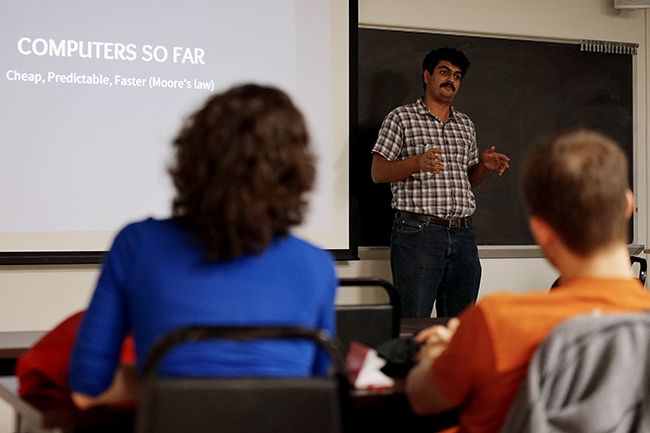 Lively discussion between a student presenter and an engaged audience punctuated a presentation that questioned the future of jobs and robotic automation.

The Molotov Seminar is a regular forum that allows students from any field, graduate or undergraduate, to present on a topic they are interested in to their peers. The seminars normally last a little over an hour, and typically begin with a brief presentation by the speaker that leads into an informal discussion loosely moderated by the speaker.

Physics doctoral student Abhranil Das, who organizes the series, said he was inspired to start the seminar after he discovered fellow physics graduate students had passions and interests that reached far beyond their chosen field.

“You cannot define people based only on what they’re studying,” Das said. “At its base, a place like university is supposed to be about the free exchange of ideas.”

The seminar has hosted 21 presentations since the program began in the summer. Topics have included the road to democracy, the importance of the study of particle physics, meditation, and Friday’s presentation on the threat robotic automation poses to jobs held by humans.

“The one rule in the Molotov Seminar is that you cannot be talking about anything too technical, so anything you talk about should be accessible to anyone in the room, no matter how much their background is on that subject,” Das said.

The seminar was named as a tribute to a rumor that another campus seminar encouraged attendees to bring and share whiskey, according to Das. He said he hopes his explosive twist on the discussion format will cause people to take notice.

At Friday’s event, a small, but engaged audience asked questions and proposed solutions to the problem presented by the speaker, physics doctoral student Siva Swaminathan.

“Sitting back on a Friday evening and letting your mind loose a little bit, I think that’s what draws me to this,” Swaminathan said.

“I think it’s a great platform, not only because it’s students presenting to students, but also because it brings people across UT together,” Naik said.

Das said he encourages more undergraduates to present in the series. Anyone can submit an online request to present, he said.