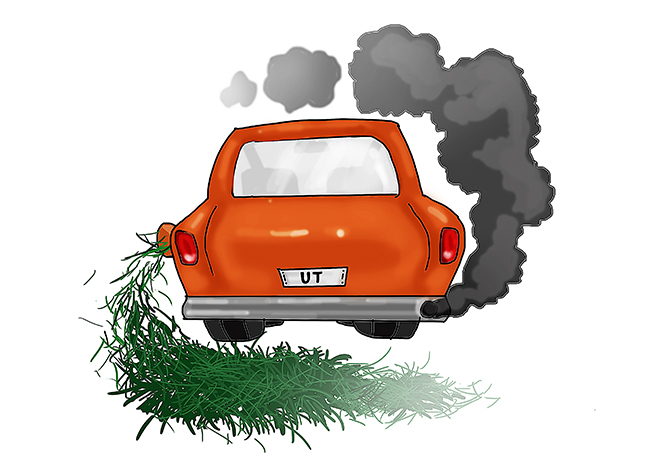 Editor's note: This column appears in a point-counterpoint regarding UT's research on the use of switchgrass as a biofuel. To read its counterpoint, click here.

Next year, UT researchers will receive $15 million in grants to study switchgrass, a plant species used to produce ethanol. The researchers aim to study factors surrounding the plant’s growth rates, but because of negative impacts on air quality, fertilizer use and food security, these funds would be better spent researching different energy sources.

In 2007, President George W. Bush signed the Energy Independence and Security Act with the hopes of achieving energy independence and cleaner air quality. It subsidized corn-based biofuels to help achieve these goals, but unintended consequences surfaced.

Early production of supposedly clean ethanol has failed to meet reductions in greenhouse gas emissions and has subsequently raised the emissions of other pollutants such as particulate matter, sulfur dioxide and others, according to a 2015 study by the University of Tennessee.

To accurately measure all aspects of biofuel impacts, scientists need to take into account both the resources used in corn production and changes in land use. Natural gas and coal are used in the ethanol manufacturing processes, and petroleum powers machines that transport and cultivate these crops. All of these fuels release air pollutants. Furthermore, farmers often clear land with existing plant life for biofuel crops that uptake less carbon. If these factors are accounted for, the benefits of ethanol become much less promising.

In addition, biofuel crops require intensive amounts of nitrogen-based fertilizer. When these fertilizers drift into bodies of water, dead zones occur as a result of hypoxia, a reduction in dissolved oxygen levels caused by excessive algal blooms. As a result, many aquatic organisms such as fish, mussels and crabs die and disrupt ecosystems.

Finally, biofuel crops have contributed to food price increases. According to Environmental Health Perspectives, the diversion of food crops for biofuels contributed to an 83 percent increase in global food price in 2008. While this is a complicated issue that cannot solely be attributed to biofuel production, their effect shouldn’t be dismissed.

Still, one cannot analyze biofuel crops apples to apples. UT researchers are analyzing switchgrass, while the effects listed above focus on corn-based ethanol. Switchgrass supporters argue that they use less water and fertilizer for production compared to corn, but the amount of research needed to mitigate unwanted emissions without compromising other environmental aspects is tremendous.

Although solar, electric and even air-powered cars are still far off from widespread use, scientists should study these lower-drawback alternatives instead. Instead of pouring more money into the sunk cost of biofuels, researchers should work on developing other renewable fuel that have fewer negative impacts.