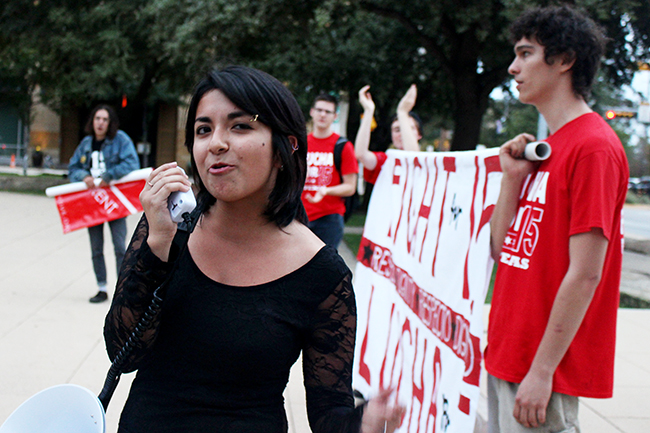 While chanting “hold the burgers hold the fries, make our wages supersized,” activists and UT students rallied Tuesday on the steps of City Hall to support worker’s rights.

Beginning at 6 a.m., organizers formed a strike line and marched through several Austin businesses, including Taco Bell, McDonald’s and Church’s Chicken, where they were able to pick up a few supporters as part of a National Day of Action for a $15 minimum wage.

“We’re going around shop to shop, talking to workers one-on-one, sitting down having meals, building those relationships,” Brad Crowder, branch organizer for Socialist Alternative of Austin, said. “We have fast food workers who are in motion, they’re learning how to strike, they’re learning how to struggle, and so we want to be a part of that socialist alternative to help build that up and strengthen it.”

“What we’re seeing now with the strike is an actual exercise of power by working-class people,” Crowder said. “The Church’s Chicken where the workers walked out of, they actually shut the store down, and so what we want to do is have working people, particularly working class people of color, learn their strength when they go on strike.”

Casar said through his City Council election in 2014, he learned successful organizing is effective in bringing about change, as was the case in Seattle when the city council passed minimum wage increases in June 2014.

“We have a state regime that makes it so the city of Austin can’t take some of the bold actions that have been taken in Seattle,” Casar said. “We are smarter than the state legislature, as far as I can tell. … When folks who are organized push for things, they can get things done.”

Sociology senior Sarahi Soto said students should care about minimum wage increases and income inequality because of the high number of minimum wage jobs on campus.

“A lot of us are going to be joining the work force someday, if we aren’t working already,” Soto said. “I don’t think a lot of students really know about this movement, but we brought it to Austin, it’s growing, so we hope that eventually more students can get involved.”