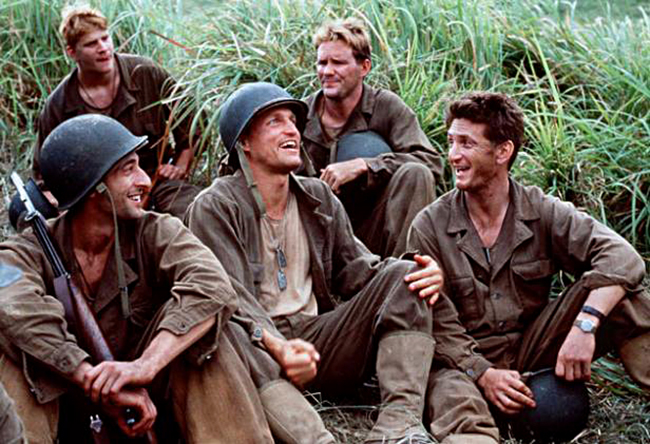 To commemorate the men and women who have served in the U.S. Armed Forces, The Daily Texan has compiled a list of three films to watch on Veterans Day that capture the experiences of soldiers who answered the call of duty.

Riveting from its pulse-pounding start to devastating finish, “The Hurt Locker” chronicles the missions of an Explosive Ordnance Disposal unit during the Iraq War. The squad’s new leader is Sergeant William James (Jeremy Renner), a reckless yet effective soldier. While his teammates Sergeant Sanborn (Anthony Mackie) and Specialist Eldridge (Brian Geraghty) initially disapprove of his methods, they slowly form a bond that will be tested by the increasingly dangerous challenges they must face.

Director Kathryn Bigelow suggests war is an addiction, and James grows so accustomed to the high-stress environment that he feels out of place in domestic life stateside. War takes its toll on him, posing many morally ambiguous questions that Bigelow doesn’t give easy
answers to.

“Full Metal Jacket” is two films – the first is a light-hearted boot camp drama, and the second is a gritty, Vietnam War epic. Both halves are connected by two soldiers: Private “Joker” (Matthew Modine) and Private “Pyle” (Vincent D’Onofrio), both of whom experience dehumanization at home and abroad.

Directed by Stanley Kubrick, the superb cast of “Full Metal Jacket” lends enormous power to its straightforward story. The film’s stand-out character is a tyrannical drill instructor played by R. Lee Ermey, who was actually a drill instructor during the Vietnam War and improvised most of his character’s humorously savage insults.

But once the soldiers hit the battlefield, the film’s humor gives way to dark psychoanalysis. Kubrick explores how far people can be pushed before they break and how the enemy is not always so easy to kill.

Released the same year as “Saving Private Ryan,” “The Thin Red Line” was undeservedly overshadowed. This Terrence Malick picture is a thoughtful take on the futile nature of human conflict, set in the Pacific theater of World War II.

Witt and the men of his company encounter heavy Japanese resistance as they press inland, but Malick finds little pleasure in the ensuing violence. At one point in the film, the Americans successfully raid a Japanese encampment, overrunning the malnourished and dying Japanese soldiers. Malick depicts the suffering and loss on both sides during the battle; there is no glory in his portrayal of war.

Their friendship is shattered by the Vietnam War, during which they are captured by the Viet Cong and physically and spiritually damaged as prisoners of war. After Mike and Nick are forced into sadistic game of Russian roulette by their captors, they manage to escape with Steven but are ultimately separated. Mike returns to America haunted by his failure to keep the group together.

“The Deer Hunter” is a haunting look at the senselessness of war. The film uses Russian roulette to symbolize the horrible suspense that soldiers feel on the battlefield, where death can come for them at any moment. For the characters in the film, the fear of dying is worse than
dying itself.