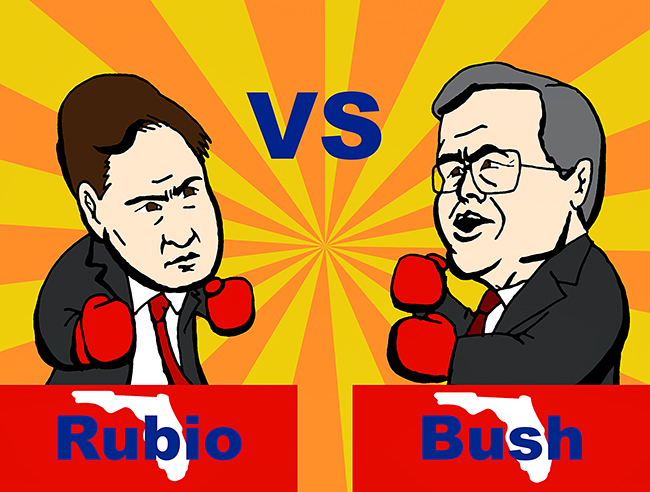 Four years ago to this day, eventual Republican presidential nominee Mitt Romney only had a slight lead in the polls over Herman Cain, former president of the National Restaurant Association, and would shortly be overtaken by Newt Gingrich, former speaker of the House.

These polls conducted so far in advance of the election aren’t accurate representations of who will win the nomination.

So while Trump and Carson may lead the polls today, if history is any indicator, Marco Rubio, Jeb Bush, Ted Cruz or John Kasich have the best chance of winning due to their experience. Yet Cruz is most likely too conservative and Kasich too liberal to win the nomination.

Thus, the race for the GOP nomination is a battle of contrasting styles between Florida’s former two-term governor and its current junior senator.

As the more experienced of the two Floridians, Bush often cites his gubernatorial record. Yet, the self-described introvert has lacked pizzazz in the debates, opting for substance over style.

It’s unfair that Jeb is connected with his father and brother, George W., but it is a reality. As Shooter Russell, state director of Jeb Bush’s Mission: NEXT program and government sophomore said, Bush’s association with his family shouldn’t be a turnoff to voters.

“People believe that the Bush name is a weakness but it’s not. Jeb is his own man and has a track record to prove that,” Russell said. “He’s not going to tailor his comments or tailor his views based on what he feels is politically expedient.”

Rubio, on the other hand, has aimed to evoke emotional reactions and excitement from his audiences by insisting that the focus should be more on a candidate’s ideas than experience. He oozes optimism for “a new American century.” And as the son of Cuban refugees, he’s Latino, a demographic that the GOP has lacked support from in previous elections.

Rubio is new, less experienced than Bush, a fresh face, whatever you want to call it — and that’s exactly what the GOP needs in this election.