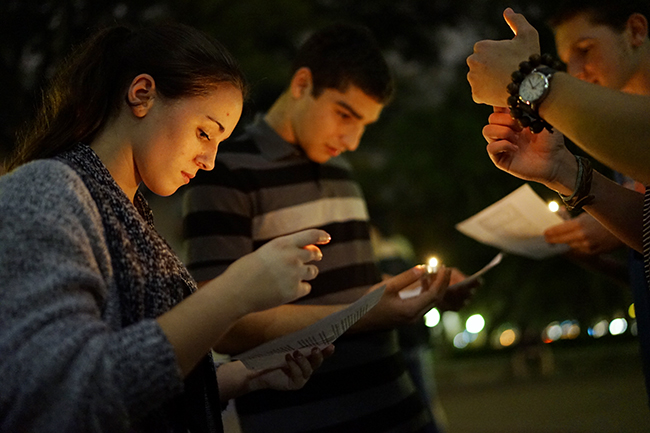 About 30 students gathered Tuesday evening for a vigil that event organizers said they hosted to show respect for the lives lost in the Israeli-Palestinian conflict.

Texans for Israel and Texas Hillel hosted the vigil on the steps of the West Mall to give concerned students the chance to come and speak about their personal connections to Israel and commemorate the victims of terror, regardless of race or religion, organizers said.

Kevin Lefkowitz, Texans for Israel president and history sophomore, said the vigil was important to him because he has relatives residing in Israel.

Multiple members of the crowd spoke about family members and friends they have lost because of the conflict and read other stories of lives lost in the past month.

Elementary education junior Iris Toth said she came to the vigil to show solidarity and to commemorate the lives that were lost.

“My first cousin lives in Jerusalem, where a lot of the attacks have been happening,” Toth said. “I feel very personally connected. Her parents are actually there visiting her now, so they’re definitely in my thoughts, hoping that nothing happens.”

Mohammed Nabulsi, law student and member of the Palestine Solidarity Committee, said the group did not formally attend the event because of its opposition to actions in Israel.

“We condemn [Texas for Israel]’s cynical use of Palestinian death in order to present themselves as concerned with Palestinians when they actively support occupation, colonialism and apartheid and in order to further misrepresent the conflict as one of moral, political and material symmetry amongst the parties,” Nabulsi said.

Lefkowitz said the vigil was an offering of respect for all victims of terror, not just those lost on one side.

“We’re all the same, it’s just whatever circumstances you’re born into,” Lefkowitz said. “That’s the reason we wanted to put something like this on, so we can all step away from the politics, get away from all that and just focus on the fact that we’re all humans, we’re all individuals and we all have families that love us and that we love.”