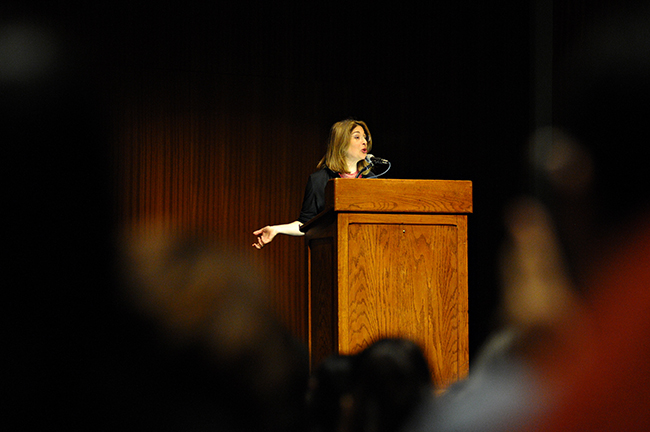 It was standing room only for Naomi Klein’s presentation to students and the general public in the LBJ Auditorium on Wednesday night.

Klein was invited to campus as the eighth C.L. and Henriette Cline Visiting Professor in the Humanities, an annual series featuring distinguished scholars, writers, and artists. Klein discussed her new book and documentary, “This Changes Everything: Capitalism vs. The Climate,” which argues for changing current economic models in order to save the environment.

Klein, an award-winning journalist and a New York Times Bestselling author, said her explanation for climate change, such as the rising global temperature and increased frequency of severe weather conditions, have not been taken seriously as a global issue because it was recognized at the “worst possible” moment.

“It was epic bad timing,” Klein said. “1988, that’s the year governments started meeting to talk about what we are going to do about this. It was also the ascension to neoliberalism. The idea there is something sinister about collectivism and the idea we can do good things when we work together. Climate change is the very essence of a collective problem.”

Klein said she was not always interested in covering climate change.

Philosophy freshman David Huber attended the lecture as extra credit for his class, “The End of the World As You Know It.” Huber said he wants to go into environmental law so the talk was very relevant to his interests.

“I learned Klein is extremely leftist,” Huber said. “I tend to have more conservative views so I guess it really opened my eyes to more of the left’s ideas. Learning about neoliberalism and its decline was insightful. Her solutions were well founded but the implications they would have on our economic system I disagree with.”

Heather Houser, associate English professor, introduced Klein and said she was delighted to welcome her.

“‘This Changes Everything’ is Naomi’s most direct contribution to politics,” Houser said. “This book has made her one of the most indispensable and inspiring imaginers of our environmental future.”