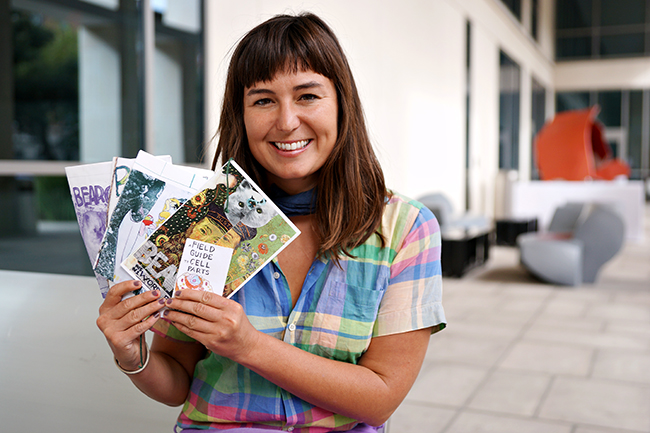 Vaughn integrates the arts and sciences through zine-making. She said she hopes her Bearcat Zine will bridge the widely perceived gap between the two disciplines by using art as a form of communication. Bearcat incorporates a variety of visual elements, such as handmade collages composed of vintage postcards, pictures of cats, biological diagrams and handwritten prose entries.

The title Bearcat comes from the Chinese word for panda, which is made up of the two separate Chinese words for bear and cat. Vaughn, who speaks five languages, said she enjoys bringing together a variety of elements into a final artistic product.

“I like taking two concepts and summing them to make a whole greater than the sum,” Vaughn said. “It’s great to be able to look at a piece that is collectively comprised of different contributions from different sources and then have this whole that is totally unique and different. I like creating things that no one has ever seen before.”

“There’s no real right way to make a zine,” Kirages said. “You don’t really have to answer to anyone, but you can also collaborate with others. You can literally do anything that you want to.”

Previous issues were centered around the themes of memory and nostalgia, comedy and literary submissions. Vaughn has also made an illustrated pocket-sized field guide to cell organelles. Vaughn’s zines feature primarily her own work, as well as submissions from friends and other zine-makers.

All works are presented anonymously without names, although Vaughn occasionally includes notes from C.C. Elegans. The pen name is a play off of the scientific name for the roundworm, C. elegans.

Corey Nacrelli, a contributor to the zine, has provided images for Vaughn to integrate into her collages. Nacrelli said he was able to observe the scientific lens through which Vaughn views creative projects.

“She is constantly running in every direction, trying to find a neat way to integrate science and art,” Nacrelli said. “In the art world, there’s not too many people who have that kind of perspective. I just think that’s kind of refreshing.”

Amanda’s biochemistry research focuses on spinal birth defects caused by folic acid deficiency. Halfway through her Ph.D. program, Vaughn said she hopes to teach science through art in some form in the future.

“Art is something that’s beautiful to look at and experience, but I think that we can use art as a way of communicating more often,” Vaughn said. “My goal is to encourage people to love science the way I do and to realize that it’s just like another form of art.”

Aside from making zines, Vaughn is also currently working on mural-sized paintings in her own cartoon style of proteins she has observed in her lab and portrayed. Vaughn said she sees a need for change in the way the sciences are taught and presented to students.

“In the era of the great thinkers, there was not this stigma about science being a negative thing,” Vaughn said. “It was more like a perspective through which you viewed the world. If people are brought onto the scene with a sense of fear already installed in them, I don’t think we’re going to advance in science. We need people that have different perspectives that are bringing something to the table.”