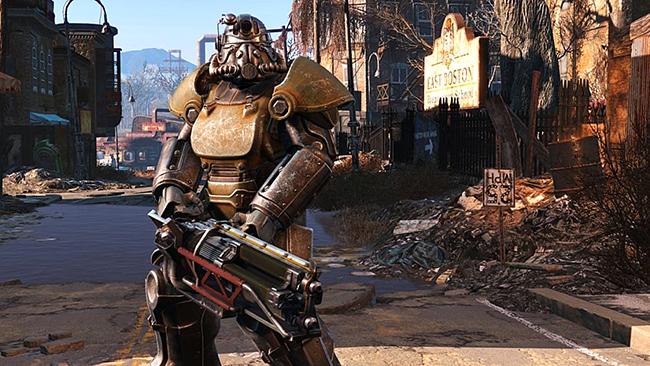 “Fallout 4” is an expansive adventure through a deadly, post-apocalyptic nuclear wasteland. The game gives players unprecedented levels of freedom, letting players mold and interact with the desolate world presented before them.

But, the player doesn’t start off in this unforgiving wasteland. The story begins in an alternate reality of a 1950s-esque Boston. An alternate reality faced with a grim future of nuclear Armageddon. Barely escaping to the safety of an underground vault, the player emerges only to encounter a world ravaged by war and radiation.

Unlike previous Fallout titles such as “Fallout 3” and “Fallout: New Vegas,” the story takes a much more pronounced role, rather than being overshadowed by gameplay. “Fallout 4”’s factions have varying intricate philosophies which add complexity to the storytelling.

Fallout’s main story has always been linear or based on simplistic choices, “Fallout 4” deviates from this, trying to blur the lines of morality, making the choice of who to side with an unexpectedly difficult decision. The story takes full advantage of its post-apocalyptic setting to explore the most irredeemable actions in a humanizing light.

However, like its predecessors, “Fallout 4’s” story is still overshadowed by the immense sense of exploration the game offers. New diverse and aesthetically-fitting landscapes are filled to the brim with rewards for adventurous players. Boston serves as a phenomenal setting for the title with locales such as Fenway Park and the historic Freedom Trail hiding tons of loot and enemies, making the expansive world feel packed with content.

As with all Bethesda games, the massive open world comes with a price. The game is prone to occasional bugs and crashes, but the bugs are rare enough to not distract the player from enjoying the game and all it has to offer.

The game has also received some overhauls to multiple aspects of gameplay that are welcome improvements to “Fallout 3’s” formula. Loot has been given an expanded role, no longer serving as junk that clogs your inventory. Fallout 4’s new settlement builder and crafting requires the player to horde loot to convert it into materials, which can be used to build settlements and modify weapons and armor.

Settlements add a nice change of pace from the explore-and-shoot rut that the series has carved out, adding a creative outlet for the player to build additions to the wasteland. The player is incentivized to build settlement by giving builders access to more money, loot and weapons.

“Fallout 4’s” gunplay has been vastly improved from previous titles in the series. The gameplay is now more reminiscent of a typical high-quality shooter, featuring guns with realistic handling, controls with increased fluidity and enemies that make marksman-like shots key to survival.

The combat has been significantly improved over “Fallout 3”’s clunky mechanics so that the previously needed Vault-Tec Assisted Targeting System — or VATS — is rarely used.

Like combat and loot, crafting has been completely overhauled. Armor and gun mods let the player turn ordinary weapons into unique death machines, modifying a weapons stats, abilities and appearance. This extra level of customization adds layers of depth to Fallout’s weapon system, bringing it more in touch with its RPG roots.

Power Armor functions differently from that of previous titles, no longer serving as a heavy set of wearable armor. The player now enters Power Armor like a vehicle, gaining tank-like abilities that let the player mow down enemies easily, but it comes at a price, as fuel is now needed to maintain the power armor, giving the armor limited use.

“Fallout 4” seeks to be an expansive experience above all else, but maintains its excellence in all other aspects of its design. While it can be marred by occasional technical issue, it proves to be a consistent improvement on its predecessors, proving that while war never changes, Fallout does.