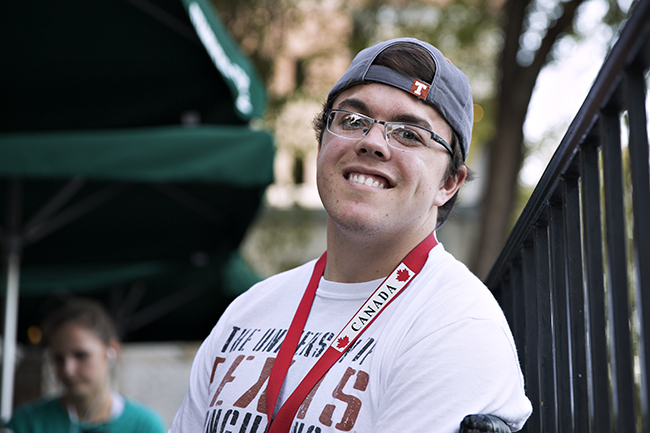 The first thing biology freshman Austin Morgan used to do before hopping on his dirt bike was put on his thigh-high socks. His knee braces followed, hidden beneath the thick fabric of his pants. Then, he climbed into his knee-high boots, pulled a jersey over his head and topped it off with a plastic chest protector. He slid on his gloves, goggles and finally, his $400 helmet.

But no matter how much equipment he wore, nothing could have prevented his accident on July 6, 2014.

Austin crashed last year while practicing on a track outside of Bastrop, Texas. Doctors initially predicted his brain injury would kill him, but after a year of therapy, Austin stepped foot onto the 40 Acres with a plan to become a neurologist and confront the same questions that puzzled his doctors.

“I want to help people who have gone through similar circumstances as I did,” Austin said. “I went through a brain injury, and I know firsthand what goes on.”

Austin started racing dirt bikes before he started kindergarten, prompted by a deal from his father — “If you learn how to ride a regular bike, I’ll get you a dirt bike.”

Since then, he has gone through nine bikes and countless races. He focuses on trail rides in which a track is carved into a wooded area and riders are given a specific amount of time – usually 30 to 70 minutes – to make as many laps as possible.

When he wasn’t racing at trail rides, Austin spent his weekends competing at motocross races. On the day of his accident, he fell while riding across a trail of whoops, or short consecutive inclines.

“I made it about half way, and then I somehow went down,” Austin said. “I don’t know how. The only eyewitness to the wreck was a 7-year-old girl who said my bike ate me.”

He was helicoptored to a hospital where doctors diagnosed him with severe intracranial pressure and a broken back, collarbone, eye orbital and finger.

His best friend, Mason Houston, said he visited the hospital every day after work, sometimes spending the night so that Austin’s mom could go home.

“When you have an image of somebody who has been a certain way for so long, and then you see them lying on their back in a hospital bed — it’s pretty hard to see,” Houston said.

Austin eventually woke up, unable to speak or walk. He stayed at several hospitals and rehab centers over the next year, visiting therapists regularly to regain speech, mobility and most of his long-term memory. Memories from the day of the accident and the 30 days that followed never resurfaced.

“Basically, I lucked out that this injury will continuously heal for the rest of my life,” Austin said. “But that’s also the downfall. I’m kind of an impatient person and [the rest of my life] is quite a while.”

His mother, Brenda Morgan, attributes Austin’s full recovery to his positive attitude. She said throughout the process, Austin remained determined to recover fully.

“There was something inside him that wanted to wake up,” Brenda said. “[Later on in his recovery,] the therapist would be like ‘Let’s take a break,’ and he was like ‘No, let’s keep going.’”

Today, Austin said he can’t run or play sports and has learned to write left-handed because the right side of his body is affected by spasticity, a condition that causes muscles to constantly contract. He said he used to be the kid in high school who postponed studying until the morning of, a luxury his short-term memory no longer allows. Even so, he takes it all in stride.

“We only have one life,” Austin said. “You can be bitter, you can be angry, or you can be positive. Being positive is a hell of a lot better than being negative.”