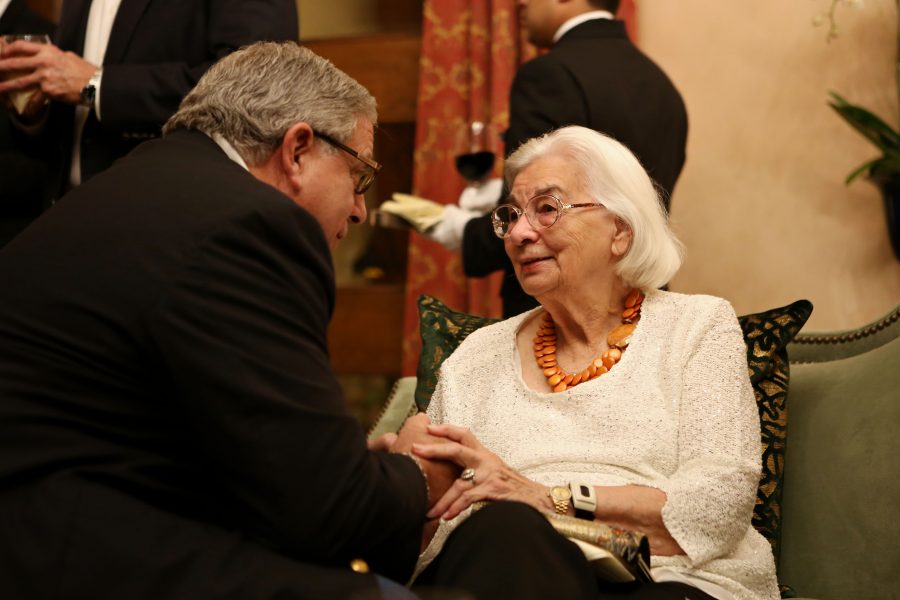 Members of the Legacy Council came together at Arlyn Studios on Friday night to celebrate the organization’s fundraising efforts this year. The event honored council members who raised at least $1,000 for Alzheimer’s research as part of the Darrell K Royal Research Fund for Alzheimer’s. But fundraising is only one aspect of the Legacy Council’s work.

“You’re not only raising money for support for research, but you’re creating this community of people that you can talk to about [Alzheimer’s],” Legacy Council member Katie Smith said. “You have that community that has that same experience and can listen to you if you’re having a bad day or you just have a really bad experience. You’re creating that foundation and those relationships.”

The Legacy Council is a branch of the DKR Fund for young professionals under age 40. Most members have personal experience with the effects of Alzheimer’s disease on members of their families.

Host committee chair Howell Beaver joined the council shortly after its creation in 2012. His father was diagnosed with Alzheimer’s and battled the disease for 10 years. He died in January.

“[My dad] played football at Georgia Tech, and that was certainly one of the things he and I loved together,” Beaver said. “He was a musician, and country and bluegrass music was his thing. [The DKR Fund] was country music, Texas football, and Alzheimer’s … I wanted to get involved in something and this was exactly the perfect thing for me.”

According to Beaver, finding a community of people who understand the detrimental effects of Alzheimer’s is one of the most helpful ways to deal with the disease. Because the disease is a slow, degenerative process, Beaver said there’s often a taboo around discussing it.

“There’s just a lot more [people affected by Alzheimer’s] than I expected,” Beaver said. “For people to come back and say ‘I just found out this year that my dad’s got it.’ and now it’s ‘What do I do, how am I going to pay for it, how is this going to play out?’ And there’s no good answer for any of those questions. I’m talking about strangers, folks I don’t know — but I know them and they know me better on that level than my best friends.”

The Legacy Council provides that support system for those affected by the disease. Many members are UT-Austin graduates who share a connection to the University and former head coach Darrell K Royal’s lasting impact on Texas football. The council is a way for family members of Alzheimer’s victims to find solace in each other through shared traditions.

“It’s not just about Alzheimer’s, it’s about the community of Austin and how much people loved Coach Royal,” Smith said. “It really brings people together not just for Alzheimer’s, but people with a history in Austin that want to be a part of this community and legacy.”

The Legacy Council event was just one of a series of events hosted by the DKR Fund this week. The DKR Fund paid tribute to Edith Royal with a gala for her 90th birthday celebration Thursday. The fund also announced the five recipients of its annual research grants for a total of more than $750,000 toward Alzheimer’s research.