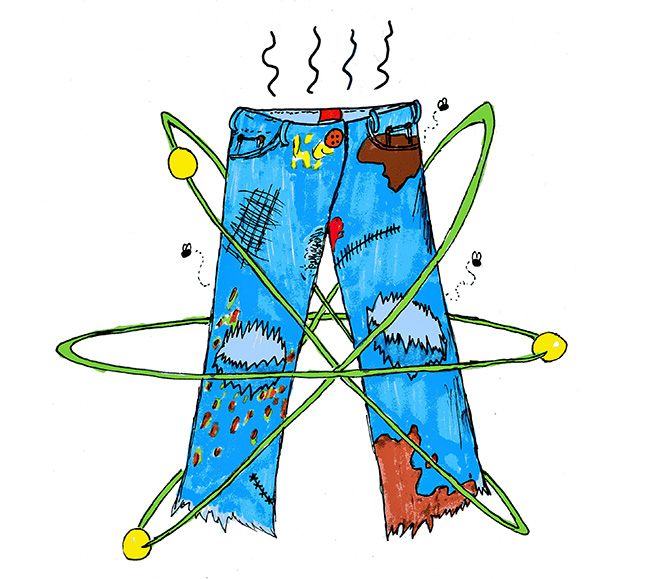 Blue jeans are the staple wardrobe item for college students ­— they can be worn repeatedly during laundry dry spells, and students can throw them on with any top when running late to class.

Most wearers agree that blue jeans are comfortable, according to interviews in the book “Blue Jeans: The Art of the Ordinary.” Authors Daniel Miller and Sophie Woodward found people believed jeans “go with everything,” are low maintenance and gradually adjust to the wearer. They also have the ability to transcend social categories because they are seen as classless and appropriate for both men and women.

But many of the characteristics that make denim jeans so comfortable and that wearers take for granted aren’t really physical qualities of the textile.

Ideas about blue jeans, such as that they don’t need to be washed as often as other garments and that they can match with any outfit, are culturally ascribed features, according to the Global Denim Project. Communication studies grad student Camille Hall said she’s noticed these features of jeans are simply social conventions.

“If you think about it, they’re just blue pants,” Hall said. “Blue jeans go with everything because we’ve made it so.”

Cultural convention has also made people think denim is rough and impermeable to dirtiness. For example, people that Miller and Woodard interviewed, often said jeans don’t need to be ironed, but denim has no unique physical characteristic that makes them wrinkle-free. Instead, this perception is made possible by the convention that jeans don’t need to be tidy. Chip Bergh, Levi’s CEO, reinforced this idea by publicly saying he hasn’t washed his own jeans in over a year.

“If you talk to real denim aficionados, they’ll tell you: You don’t wash your blue jeans,” Bergh told Fortune.

Such ideas about the physical roughness and hardiness of denim may be products of its historical associations with heavy labor in the 19th century. Jeans began to be used as casual wear in the 1950s, according to Levi’s historian Lynn Downey’s research. At that time, they became associated with particular subcultures, such as the rebellious youth and American cowboys.

By the 1970s, blue jeans eventually broke out of these cultural niches, and people gradually integrated them into popular culture. A global 2008 survey found that 31 percent of people own three or four pairs of jeans, while 29 percent own between five and 10 pairs. Millions of wardrobes all over the world possess at least one pair of regularly worn jeans.

Its worldwide spread helped normalize peoples’ ideas about the comfort and convenience of wearing denim — ideas that don’t come from any intrinsic quality of the fabric.

A pair of blue jeans’ capacity to make people feel more comfortable than other clothes goes one step beyond attributes that make them convenient. People also reconcile physical comfort with the social concern of how they look in public. Speech pathology senior Aubrey Folck said she loves wearing jeans, not only because she thinks they’re comfortable enough to sleep in but because there’s no social pressure against wearing them.

“If you’ve got the right pair, you don’t really notice you’re wearing anything,” Folck said. “But also, you don’t have to worry about a pair of jeans out in the world. Any pair of jeans is cool.“