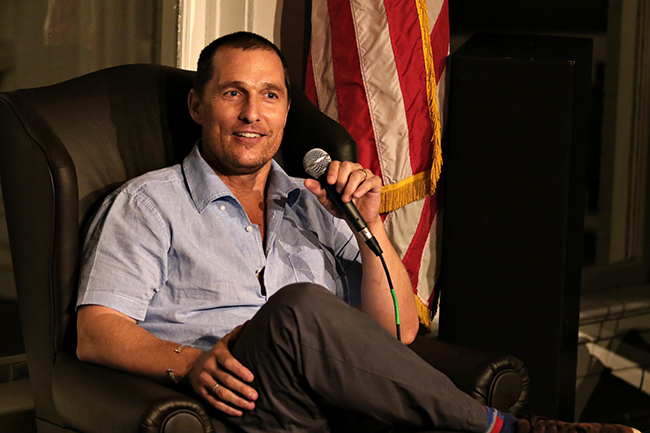 People know “Alright, alright, alright” as the catch phrase of beloved stoner David Wooderson from “Dazed and Confused.”  But to Matthew McConaughey, they’re the first three words he ever said on film.

The actor, who spoke at the Tejas house on Wednesday night, answered the crowd’s first question with “Let me tell you a story.” What followed was a series of anecdotes about the actor’s career, his advice for students and his thoughts on Longhorn football.

Before landing his first role on Richard Linklater’s cult hit “Dazed and Confused” in 1993, the Texas-native was enrolled as a student at UT. He said he originally intended to go to law school. But after reading Og Mandino’s book “Greatest Salesman in the World” — which follows a philosophical journey of a poor camel boy who achieves success —  he called his father and said “I want to go to film school.”

McConaughey’s career was established by 2009, but he realized Hollywood had started to typecast him into romantic comedy roles. Then, in 2010, he decided to take two years off of work and disappear from the big screen. What came next was the period now known as “The McConaissance.”

“There was a moment where I sat there and my interests had changed,” McConaughey said. “I started to read some rom-coms and I thought ‘I feel like I could do this tomorrow.’ Not that there’s anything wrong with that, but I wanted to read something and go ‘I don’t know what the hell I’m going to do, but I love it.’ Those two years off, I didn’t rebrand, I unbranded. And by unbranding, I became sort of anonymous.”

Since his career shift, McConaughey — who has acted in more than 50 films — has gone on to star in movies such as “Interstellar,” “The Wolf of Wall Street” and “Dallas Buyers Club.” With three movies recently wrapped, McConaughey said his only plans for the future are to continue accepting roles that challenge him.

“[I plan to] keep doing stuff that turns me on, scares me, stuff I’m not sure about,” McConaughey said. “There’s good fear and there’s bad fear. Then there’s the fear that ‘I don’t know what I’m going to do with this, but I’m going to dive in.’ That’s not a fear that you should run from.”

He said the key for students looking to work in the film industry is experience.

“First of all, in the film industry, there’s no help wanted signs,” McConaughey said. “Number two, the guards at the gates aren’t there to keep you in, they’re there to keep you out. Get your camera out right here in Austin, find some people you want to work with, write a story, start shooting, screw up.”

As the interview neared to a close, one audience member asked McConaughey about his frequent appearances at UT football games and what he sees for the Longhorns’ futures. McConaughey said, although the team hasn’t had a perfect season, he still believes in them.

“One great thing is, after I talk to some of these young men after losses, every one of them said what they felt the worst about was letting [head coach Charlie Strong] down,” McConaughey said. “They care about each other and that’s a big thing.”

Before he ended his interview, McConaughey said he assures the audience no matter what role he takes on next, he’ll always be the same person.

“I still take my shirt off,” McConaughey said. “I still play the bongos, too.”