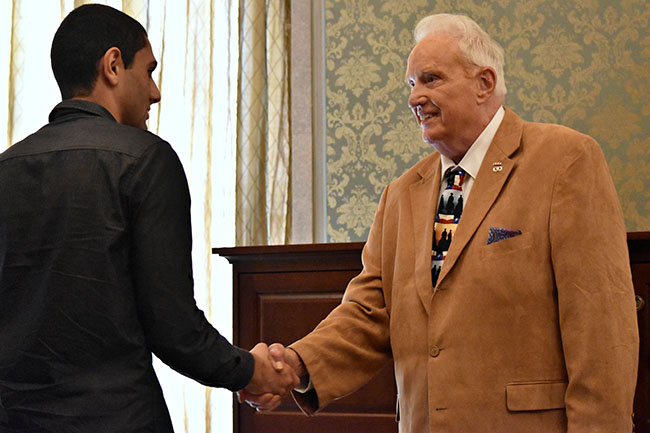 Frank Denius, World War II veteran and UT alumnus, discussed his experiences in the U.S. Army and his perspective on patriotism during a lecture honoring Veterans Day Wednesday afternoon.

Through examining U.S. involvement in wars over time, Denius said the decline of public concern could potentially have adverse consequences for both the military and citizens.

“The world is in a dangerous situation today, and I’m not sure that we realize how dangerous it is and how difficult our security and defense must be,” Denius said. “Armies can fight wars, but it takes a country to win one.”

Denius said he grew up surrounded by World War I veterans and a sense of patriotism in Athens, Texas, during the 1930s.

In the pre-Pearl Harbor era, Denius said war involvement was a critical part of everyday life, but he said he believes, even though the country may be unaware, it is still fighting a part-time war today.

“If I have a son that’s in Afghanistan, my family is going to look at the war totally different than those that have no connection or relatives that are involved in combat,” Denius said.

Mechanical engineering sophomore Andrew Repetski said he hopes to be an engineering officer in the army and attended the lecture because he was interested in Denius’s involvement in the military.

“I gained a sense of his experiences and information about what I may come across in the future,” Repetski  said. “I think it’s important just to hear about things that happened in the past that I didn’t have the opportunity to be there for or learn much about.”

Gunderson said he thinks that, while veterans are not looking for recognition, Veterans Day is a good opportunity for the country to show appreciation for them. Gunderson said through contacting loved ones such as friends and family who served in the military, Americans can demonstrate that they have not forgotten about the veteran community.

“If we don’t remember what has happened before us or what our veterans sacrificed or what our military members did, then we are worse off as a society,” Gunderson said. “I think we need to remember what they did.”