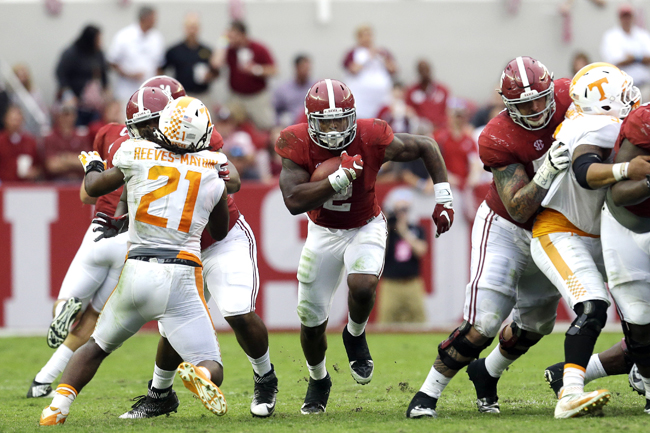 The Alabama vs. LSU matchup is always highly anticipated, but last week’s edition was extra special because of the Heisman implications. Henry led the Crimson Tide to a dominant 30-16 victory by scoring three touchdowns on 210 yards. He also made big strides in the Heisman race. His physical running style improves as the season goes on and his numbers are going up, too. If he can keep trucking through the competition, he’ll have a good shot at hoisting the trophy in a few weeks.

Week 10 was a crazy one in college football, especially for Heisman contenders. Leonard Fournette’s struggles helped Watson rise on my list, but his performance against Florida State was the true contributing factor. Watson threw for 297 yards and a touchdown and ran for a career-high 107 yards. He showed his ability to lead Clemson when the pressure’s high. Heisman voters love quarterbacks — and undefeated seasons — so Watson has a legitimate chance at earning the prestigious award.

Fournette’s performance against Alabama was, well, awful. He ran for just 31 yards and one touchdown, which came late in the fourth and is hardly a highlight. I don’t think one bad game takes him completely out of the Heisman discussion, but I do think his chances of winning are slim. Big performances in LSU’s remaining games will likely put him in New York for the presentation, because his season numbers are solid. But it may not be enough to erase the Alabama game from voters’ memories.

McCaffrey’s name has been gaining attention for Stanford, and the program showed its thanks by officially launching a Heisman campaign for the sophomore. His numbers aren’t as flashy as others on this list, but his contribution to his team is huge. McCaffrey leads the nation in all-purpose yards with 2,174 and does just about everything for the Cardinal. In last week’s victory at Colorado, McCaffrey rushed for 147 yards on 23 carries and threw a 28-yard touchdown pass late in the game. He’s fast and has a wide skill set that will help Stanford find success and just might make him a finalist for the trophy.

The reigning national champion Buckeyes may be undefeated, but inconsistent play and a weak schedule have decreased their hype. Quarterback drama and skepticism aside, Elliott has been efficient and quietly putting together a great season. He’s rushed for over 100 yards in 14 consecutive games and has scored a touchdown in every game but one this season. If he can string together some huge performances to close out the season, he could be a finalist for the trophy.