Keys to the Game: Texas vs. West Virginia 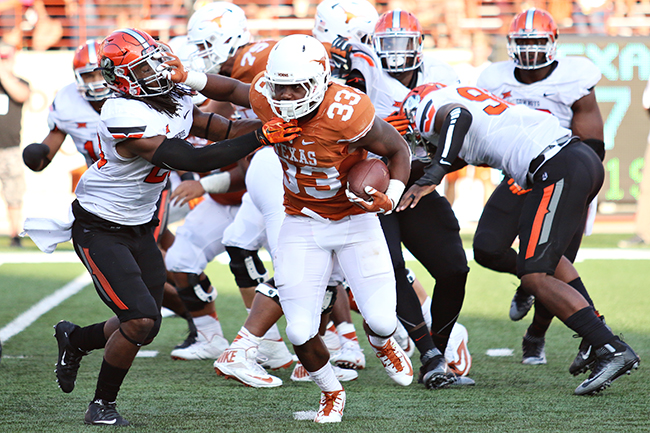 The Longhorns are still winless on the road this season, and all three of those games have been blowouts. Part of the Longhorns’ road struggles could be a mental road block. Scoring a grand total of 10 points in three road games would kill the confidence of any team.

Morgantown is no easy place to play, but the Longhorns have to come out swinging to win this game. They can’t be too conservative and need to channel what they did against Kansas in the second half. If Texas can strike first and gain some momentum, it would go a long way in regaining confidence on the road.

Sophomore running back D’Onta Foreman is Texas’ best rusher this year other than redshirt freshman quarterback Jerrod Heard. Against Kansas, Foreman carried the ball 12 times for 157 yards and two touchdowns, including 93-yard touchdown run early in the third quarter. Foreman has the ability to break off for explosive plays, which can suck the life out of the opposing team. Texas needs to balance its passing and rushing attacks while also giving Foreman the right amount of touches.

REALIZE BOWL HOPES DEPEND ON THIS

Texas will be 4-6 if it loses this game. That means the Longhorns would need to beat Texas Tech at home Thanksgiving Day and Baylor on the road the following week to make a bowl. That’s a tough feat for a very inconsistent Texas team.

But should Texas beat West Virginia, the Longhorns only have to beat either Tech or Baylor to reach six wins. That’s a much easier proposition. The Longhorns have to keep in mind the significance of this game. West Virginia is a beatable team — a win would make the road a lot easier for Texas.