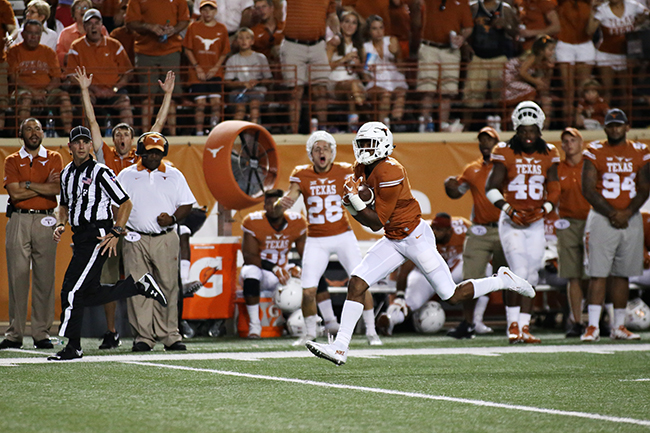 Redshirt freshman quarterback Jerrod Heard dropped back and tossed a ball 47 yards. Freshman wide receiver John Burt snatched the ball over a Kansas defender, broke a tackle and took it 84 yards for a touchdown.

The play jump-started a 598-yard offensive performance and a 59-20 rout over the Jayhawks. It also re-ignited Texas’ confidence in its passing game.

“It meant a lot,” Heard said. “Just to get on the boards first. When we get that option to go out there, we have to make points every time. That was our statement, and I know John and I really had it going that we were going to connect it on this deep ball.”

Texas hopes that statement turns into a common occurrence. The Longhorns have struggled to pass the ball this season, ranking last in the Big 12 in passing offense. Additionally, the team notched just two passing performances for more than 150 yards in nine games.

The Longhorns’ passing struggles stem partially from the team’s success on the ground. Texas runs the ball on 67 percent of its plays, leaving little opportunity to throw downfield. The team also showed it can win games on the ground while rushing on at least 76 percent of its plays in wins over Kansas State and No. 12 Oklahoma. However, the team still needs to throw the ball to keep the offense balanced.

“We can beat a team just [running] straight at their throats the whole game,” Heard said. “But, you definitely have to put the ball in the air to make the game balanced and to keep the defense on their toes.”

Texas has struggled to achieve that balance at times. In fact, the offense stumbles when it fails to run the ball efficiently. The Longhorns are 1-4 in games where they failed to reach 200 yards rushing. In those games, the team was unable to rely on the passing game for a spark while failing to pass for 125 yards in each contest.

Play-caller Jay Norvell said the team’s passing struggles come down to confidence. He said the young offense flounders when the team fails to convert passing opportunities early in games. Now, he hopes that confidence isn’t an issue after finding success against the Jayhawks.

“I just think the things we’ve been doing in practice need to carry over to the game,” Norvell said. “That’s more confidence than anything else … Some of that has to do with immaturity, young players learning lessons at different times of the year, but we have to press forward. Everybody has to understand they can bring something.”

Texas’ remaining schedule will test its confidence and balance. Two of its three remaining games are against top-seven passing offenses in Texas Tech and No. 4 Baylor. If Texas is able to build off its recent passing success, it will go a long way toward earning a bowl invitation.

“We have to push this team, we’ve got to ride them,”  Norvell said. “We’re certainly capable of all these games on our schedule. If we perform the way we are capable of, we can put together games where we can win on everybody left on our schedule.”