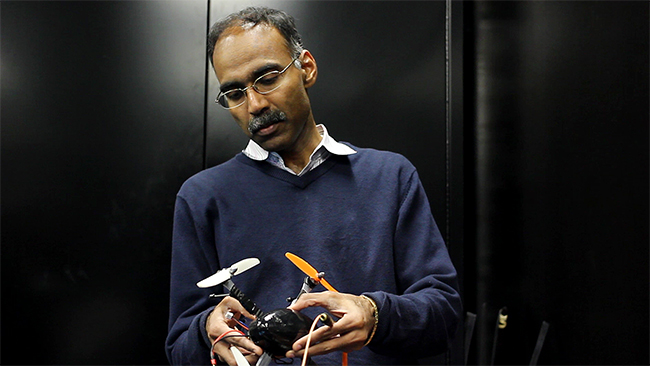 Ten years ago, hummingbirds inspired engineering professor Maruthi Akella and his coworkers to create drones that can move quickly and sense their surroundings. Now NASA, the City of Austin and the U.S. Air Force are scrambling for his designs.

Akella leads the UT Austin coordinated UAV teams. UAV stands for unmanned autonomous vehicles, commonly known as drones, which are motorized vehicles that can move without a human operator.

In his initial research at UT, Akella studied hummingbirds. He was more interested in the hummingbird’s sensory abilities than their speed. Not only can the birds go fast – they swerve and turn precisely, without running into obstacles. The UAV team works to create drones that could move almost as quickly, with spatial awareness that doesn’t require a GPS or human operator.

“Hummingbirds are at the limit of what nature can do,” Akella said. “They’re super-birds.”

The UT UAV teams are currently allied with the City of Austin in pioneering search and rescue work. The new City of Austin Rescue Robotics team is the first city department to gain permission to use drones in the US. Currently, firefighters and paramedics have to head into dangerous situations such as wildfires, floods or abandoned buildings to quickly find victims that may or may not be alive. Drones can help first responders locate people trapped in areas with debris and low visibility.

These drones can fly quickly through isolated areas, making them ideal for combat zones. The Defense Advanced Research Projects Agency (DARPA), an agency within the U.S. Department of Defense, is interested in larger models of the UAV teams’ drones.

“You’re flying through enemy terrain, jammed, and you need to do a search and kill mission,” Akella said. “There is nobody who is babysitting you from the outside — you are flying so fast and in such remote regions that there’s no opportunities for the vehicle to collect information, take pictures and send those pictures back to human operators.”

While the fastest smaller drones can go is 10 meters per second, these unmanned vehicles will move as fast as twice the speed of sound. They will have to move independently, since outside signals are often blocked by enemy forces.

Drones aren’t limited to war zones. NASA scientists use UT Austin drones in IceBridge, a six-year campaign to map Arctic and Antarctic ice sheets. Scientists have traditionally used satellites to map landscapes, but they present inherent disadvantages. If scientists are surprised by a particular picture from the satellite, they can’t move it to get a better view.
Many satellites were sent up before current camera technologies were in place — much like trying to gather data from pictures taken with a camera phone from 2005.

Drones are equipped with the latest video technologies and are mobile. They can fly high or gather data on the ground in areas that may be going through interesting changes, such as unexpectedly fast melting. These drones can map temperature, wind speed and ice shifts, as well as plot their own trajectories and avoid running into each other.

More remote than natural disaster aftermaths, combat zones or the polar ice caps is space — the latest frontier for the drones. NASA recently announced they will be recruiting astronauts for a Mars mission.

“Part of the technology for a Mars mission would require us to do autonomous operating and navigation,” Akella said. “The vehicle is going to be so far away that it can’t rely on guidance from Earth.”

Akella said UAV technology is applicable in all of these different circumstances.

“The common theme of UAVs are that they are accessible, we can build them, and that we can train them,” Akella said. “But these capabilities can solve a very diverse class of problems.”