Who Needs to Step Up vs. West Virginia 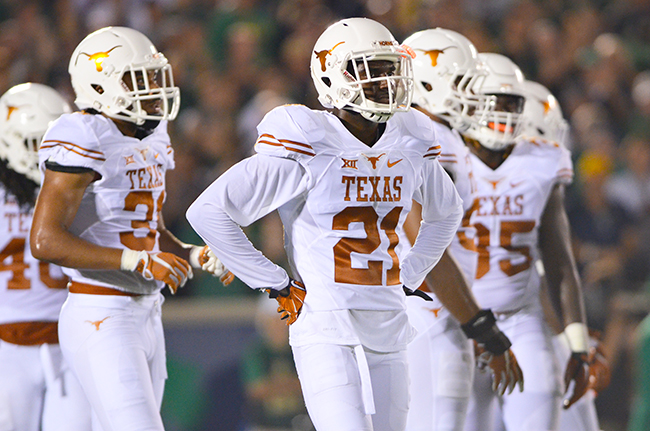 Freshman linebacker Malik Jefferson has been the star of the show since the start of the season. In nearly every big defensive play, Jefferson was there. Against Iowa State and Kansas, Jefferson did not start due to illness. Texas said it would only play him “in case of emergency.” Only a few plays later, Jefferson was on the field. He is not the only linebacker on the team. The defense needs to stop relying on him for everything. Mainly, the other linebackers need to stop relying on him for everything. There will be days Jefferson cannot play and someone else will need to step in to fill his place. Senior linebacker Peter Jinkens has shown he can make big plays. Junior Tim Cole started in Jefferson’s place against Kansas and he was able to make plays. Jefferson sitting out does not mean the linebackers are hopeless. There is other talent there — they just need to rise to the challenge.

The line played well against Kansas. They were able to put pressure on the quarterback and get a few sacks. However, this defensive line is extremely inconsistent. Against Iowa State, the line was not able to stop anyone on the offense. They have shown what they are capable of doing, but they are unable to do it on a weekly basis. The line needs to consistently step up week in and week out. The line allowed 192 rushing yards against Kansas, but allowed 238 against Iowa State. Each week, a different defensive line shows up. The line that allowed only 67 rushing yards against Oklahoma is the one fans want to show up Saturday against West Virginia.

A consistent issue with the quarterbacks is the inability to throw the ball away. Redshirt freshman quarterback Jerrod Heard struggles with this every single week. When a play is not going to work out, Heard must realize that he needs to throw the ball away. When he tries to make a play out of nothing, he either loses the ball or gets tackled for a loss — neither of which helps Texas. Being a quarterback is more than following the plays — it’s reading the field, too. If Heard sees every player is covered and there is no way he will gain yardage, he needs to throw the ball out of bounds. Junior quarterback Tyrone Swoopes improved on this front, as he had an extra year to play. Heard is still learning as he goes, and this is one of the things he needs to learn.