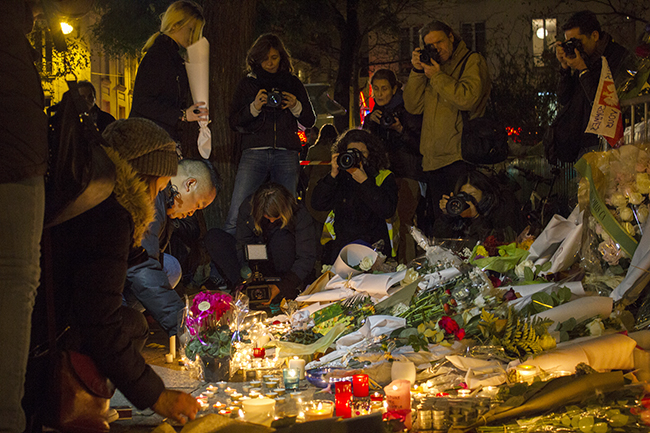 All 88 students and five faculty members currently in France were reported safe after a string of shootings and bombings in the capital city that left at least 132 civilians dead Friday night, UT’s International Office said in a statement.

The Islamic State claimed responsibility for the attacks on Saturday after the group threatened other countries in the international alliance fighting against them in Syria and Iraq. The terrorists detonated three bombs in the Stad de France and held dozens hostage in the Bataclan music hall where 118 people ultimately lost their lives.

International relations junior Mary Ameringer said she was in a bar south of the Seine River when news spread of the attacks.

“There was no warning. It took all of us by surprise,” Ameringer said. “I was at a bar watching the football game, and I was just talking with someone, and the next thing I know, the bar lady came up and asked us if we had looked at the news. At that time, 18 were dead.”

Ameringer said the bar soon evacuated all the customers, but she said people remained unsure if walking or using the metro to get home were safe options.

Kori Morris, international relations junior, said she was walking back after watching the new James Bond movie when the attacks began escalating. Parisians quickly organized on social media to get their fellow citizens to safety, according to Morris.

“Taxis started taking people home for free, and Parisians on Twitter and Facebook used the hashtag #opendoors to say ‘If you need some place to stay, we are near this place. You can come to our house.’ As the hour went on, the police said, ‘Don’t go outside, stay inside,’” Morris said.

Sirens from ambulances rushing to the affected areas could be heard all night, said Wynne Davis, international relations senior and former Daily Texan staffer. She said she was struck by the resilience of Parisians in the face of the attacks.

Morris, Ameringer and Davis study at the French university, Sciences Po. They said classes and exams will resume as scheduled on Monday, however, after-school events have been canceled in solidarity for those who lost loved ones in the attacks and because of security concerns.

“I ask that you comply with the instructions (presentation of university identity cards and bag inspections),” university president Frédéric Mion said in the email. “External guests need to be signaled in advance, and you should welcome them in person. Thank you for your understanding and cooperation with these security measures.”

The students said security at the university has already been heightened since al-Qaida attacked the satirical magazine Charlie Hebdo in January for publishing a cartoon of the Prophet Mohammed.

After experiencing the attacks Friday night, Ameringer said the threat of terrorism is more readily felt in Europe than in the United States because of Europe’s proximity to the Middle East.

“I feel like it is more of a tangible threat [in Europe as opposed to America], and I kind of felt that presence,” Ameringer said.