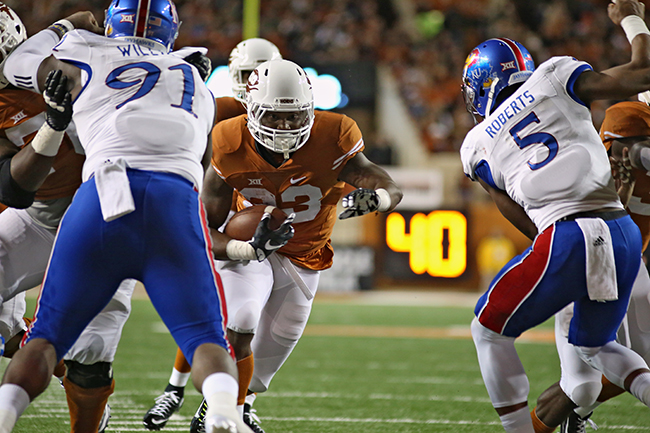 Texas doesn’t usually have issues taking care of the ball.

The Longhorns ranked No. 6 in turnovers lost coming into Saturday’s matchup at West Virginia. Yet, the team turned the ball over five times — propelling the Mountaineers to a 38-20 win.

“You just can’t have the mistakes that we have,” head coach Charlie Strong said. “It’s just so frustrating when you turn the ball over so many times. When you’re on the road, you have to protect the football.”

Junior quarterback Tyrone Swoopes added another fumble before halftime while trying to evade tacklers on a run play. The giveaway ended a 12-play drive inside the West Virginia 30-yard line. The Mountaineers cashed in with a 53-yard touchdown pass on their ensuing drive to take a 21-10 halftime lead.

“We played well enough," Strong said. "The biggest point was right there before half when we were driving the ball [and then fumbled], and then they went down there and scored right before half."

After scoring on the second half's opening drive, Texas’ sloppy offense returned in full force with three giveaways on its next six drives. Redshirt freshman quarterback Jerrod Heard accounted for two of them — including an interception with 7:12 remaining. The Mountaineers took advantage with an eight-play touchdown drive to seal the 38-20 win.

"We didn't perform today like we're capable of," play-caller and wide receivers coach Jay Norvell said. "We didn't make enough plays. We made too many mistakes. We have to do a better job upfront and with our ball carriers."

Strong expressed pleasure with Texas' play-calling despite the loss. The Longhorns found success moving the ball on the ground and managed to out-gain the Mountaineers. Sophomore running back D'Onta Foreman accounted for 147 of the Longhorns' 277 rushing yards — including a 65-yard touchdown.

“We were moving the football, and they weren’t stopping us,” Strong said. “We were only stopping ourselves. When that happens you feel like you [are] in control of the game because we were controlling the game. It was just the mistakes that we were making.”

The Longhorns remain winless on the road after being outscored 150-30 in four away losses. At 4-6, the team must win its final two games — including an away matchup with No. 5 Baylor — to earn bowl eligibility. If the Longhorns hope to earn a postseason nod, they’ll need to take care of the ball and find a way to win outside of Austin.

“It’s hard because we needed one of these last three,” senior linebacker Peter Jinkens said. “We’ve got two more, we’ve got Tech and Baylor. They have very high-powered offenses. I think we have a chance.”