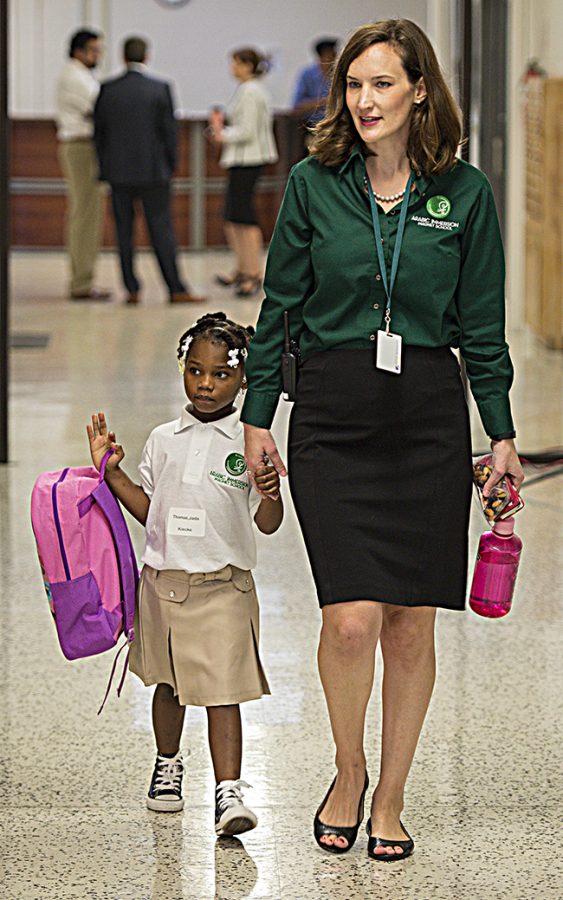 Khalid is enrolled in the nation’s first public Arabic Immersion Magnet School in Houston, where students spend 175 minutes of their school day learning math, science and language arts in Arabic and the other half of the day learning in English. AIMS welcomes pre-kindergarten and kindergarten students and will expand one grade level per year, soon to become a K-5 school.

Principal and UT alumna Kate Adams, who helped found AIMS, said learning Arabic at a young age makes it easier for students to engage in further schooling, to obtain future job opportunities and to provide a better understanding of diverse cultures.

“It’s really neat to see what kids can accomplish when you push them to do great things,” Adams said. “When you’re a 5-year-old in an Arabic immersion program, you’re probably not thinking about how you’re going to impact society, but I know programs like these help bridge cultural gaps [and] change people’s perceptions.”

Adams worked with the Houston Independent School District to compile a group of seven teachers fluent in Arabic. Jamal said the teachers’ qualifications in language and education led her to enroll Khalid in AIMS.

“The teachers she’s built the school with are all amazing individuals,” Jamal said. “They really want to make our kids better people for the future. They want to broaden their thinking and their ideas through this language.”

Jamal said she was initially worried that Khalid would not be able to engage with the Arabic material. Now, a few months into the school year, Khalid sings in Arabic and shows Jamal new yoga moves he learns in his enrichment class. Rawia El Malik, a pre-kindergarten Arabic teacher at AIMS, said about 10 children in her class can write their names in Arabic.

“The most beautiful thing you see is the kids are engaged and learning,” El Malik said. “You feel like you’re a pioneer — a civilization messenger — you’re teaching an ancient history and language. It’s really amazing and really fulfilling.”

El Malik, a graduate in linguistics, grew up speaking Arabic as well as her native language, Nubian. She uses the songs she learned in her childhood to communicate the curriculum to her students. El Malik said the Arabic language differs drastically from English, integrating poetic metaphor into the language idiomatically. She said, for example, she might relate her situation to a tree or connect how she feels with the moon.

“If you learn Arabic when you’re young, you’ll learn skills of comparing [and] cause and effect [because] we always talk with those things in mind,” El Malik said. “That’s what helps math [skills] and what helps young children be more successful later.”

On the first day of school, anti-Arab protesters gathered in front of the school, holding signs that read “Qatar out of my school.” Protesters said the school should not teach Middle Eastern culture and religion, even though AIMS’ curriculum is restricted to the language.

“[The protest] affects the teachers, and it affects the mood of the school,” Jamal said. “It affects what our kids walk into every single day.”

“Our school has students from everywhere in Houston, which is what I wanted when I was starting the school,” Adams said. “You want the school to be a school for all kinds of kids, and it’s neat that it really is.”