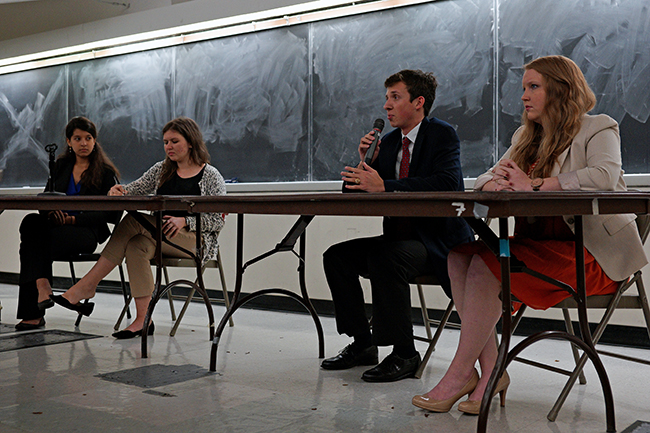 University Democrats and College Republicans faced off on Monday in a debate focused on campus carry.

The debate, which was hosted and moderated by the Student Government Supreme Court, included questions regarding concealed handgun license training, classroom safety, maintaining a free speech environment in classrooms, racism, immigrant access to guns, costs associated with CHL licenses, suicide rates and implementation of the law.

Zach Stone, moderator of the debate and SG chief justice of the Judicial Court, said because campus carry is a reality for UT, he wanted to make sure the questions focused less on favorability of the bill, but rather how students, faculty and staff will deal with it now that it is law.

Jordan Pahl, community director for University Democrats and one of the representatives for the group, said limiting the spaces where people can conceal carry their weapons would be the best way to keep faculty and students safe. Overall, the University Democrats stated their hope is for UT to do everything it can to restrict campus carry for the safety of students, faculty and staff.

“I’ve heard police officers and Army veterans say that with even their amount of training, they have trouble sometimes reacting in a situation where there is an active shooter,” Pahl said. “I don’t think anyone is saying that CHL holders are going to go crazy and really start shooting up their professors.”

Andrew Jackson, vice president of College Republicans and one of the group’s representatives, said those with CHL licenses who abide by the law should be able to have the same rights on and off campus. College Republicans made the point that despite opposition, campus carry is already law and should be honored as such.

Despite many disagreements, both groups did agree that costs of CHL licenses are too high and that once the law is passed, any sort of deviation from concealing weapons should be strictly enforced.
Stone said that overall, he thinks the debate helped the campus conversation move forward by bringing up the relevant information and important discussion topics that can be used by the campus carry working group when deciding how to implement the law.

Correction: Zachary Stone is the chief justice of the Judicial Court, not the SG chief of staff, as was previously stated.