#HornsForHumanity brings students together in remembrance of victims worldwide 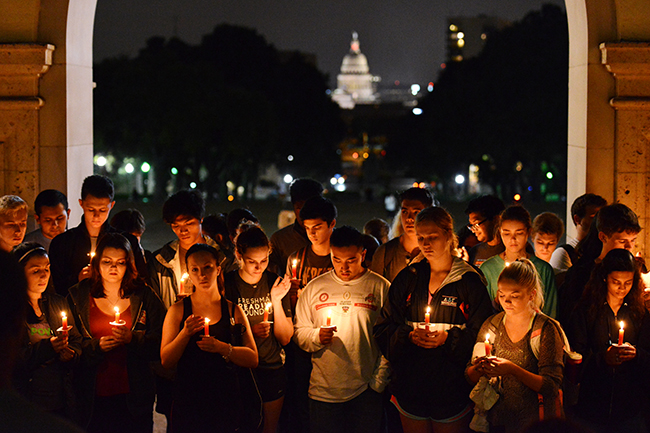 A solemn rendition of “The Eyes of Texas” was sung by a harmony of vocals at the veranda beneath the UT Tower. In a slow progression, all the candles were blown out, sending smoke and prayers into the atmosphere.

Late Monday evening, a large group of students united by the hashtag #HornsForHumanity, met at the Tower to “express [their] condolences for the various parts of the world facing tragedy,” according to the event’s Facebook page. Students met to sign a banner, light candles and participate in a moment of silence to show support for victims of various tragedies across the planet.

Business honors marketing sophomore Dylan Adkins was involved in planning the event, which was not sponsored by any specific organization.

“I really wanted to see the University do something, but it was Friday, and it was very quick,” Adkins said. “So I thought, well, since the University can’t come out and say something so quick, us students can. We just want to show our condolences to those lives and families who are lost.”

Adkins said the event was not to show support for victims of one particular tragedy, but to support all who suffered last week.

“There’s been a lot of talk in America and on campus about Paris and the attacks there,” Adkins said. “But, it’s not just Paris; it’s all of the world. What I want to do with this is show that the students here see what’s going on and we care. No matter what race, religion [or] class.”

Alejandrina Guzman, Mexican American Studies and psychology junior, said she came to the event to show support and solidarity for Paris and other countries.

“It’s crazy. I still can’t believe [the attacks] happened,” Guzman said. “I liked seeing everyone coming out and showing support, being respectful. I hope this gives the victims hope. Nothing can ever take away their pain, but I hope they see they have positive vibes and prayers being sent to them. Just know we’re in it together.”

Biochemistry freshman Ariana Chavarria heard about the event from a Facebook invitation.

“I decided to come because I know a lot has been happening in the last couple of days,” Chavarria said. “There has been a lot of tragedy. So many people have lost so many things. So I can’t do much, but I figured being here and sending some prayers would mean something to someone.”