UT alumna pens memoir on life in the fast lane 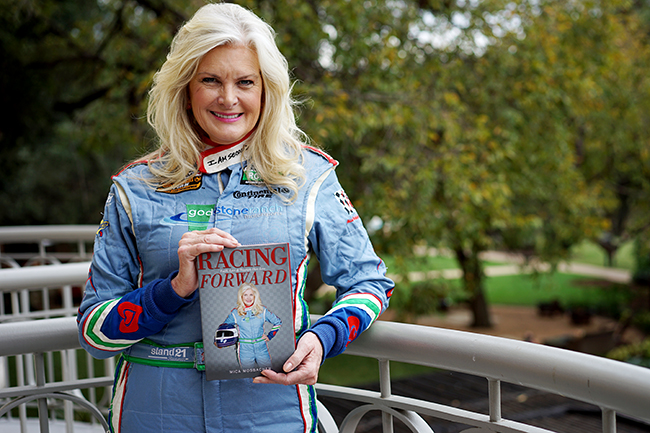 Just days after the burial of her husband, UT alumna Mica Mosbacher stood in the pits at the racetrack in Daytona wondering what was next. The loss of Robert “Bob” Mosbacher, a former U.S. Secretary of Commerce, oilman and the love of her life, weighed heavily on her mind.

Nevertheless, she had accepted an invitation from her brother, race car driver John McCutchen, to attend one of his races. As the engines began to roar around her, Mosbacher knew she was hooked.

“I felt my adrenaline kick in, and I just came alive,” Mosbacher said. “Next thing I know, I’m on the block, and I’m asking all sorts of technical questions. I was just completely consumed.”

An award-winning journalist, philanthropist, member of the board of directors for several organizations and Honorary Consul General of Iceland, Mosbacher is now working toward a new passion: racing Ferraris. Her book, “Racing Forward,” which was released in October, details her journey from building a journalism career as a single mother to embarking upon a whirlwind lifestyle with her husband, only to face the challenge of redefining her life after his death.

“Loss is what we have to contend with almost on a daily basis, and it’s important to learn how to embrace change,” Mosbacher said. “So that’s what occurred to me: I’m not in my comfort zone anymore, so I need to do something different in my life. I need to have something to race toward to propel myself out of bed.”

In her book, Mosbacher also writes openly about her experience overcoming sexual assault. Mosbacher was sexually assaulted in London during a trip as a college student and said she decided to be open about her experience when former Texas First Lady Anita Perry asked her to help raise funds for Texas Association Against Sexual Assault.

“I realized it was a topic that if I was open about it and I had survived and I was okay, it might help other women,” Mosbacher said. “Since then, I’ve had a lot of women talk to me about it and fathers and men.”

By the time she met Bob, Mosbacher had gone through two failed marriages and a sudden layoff. A single mom in her 40s, Mosbacher spent her days working at Saks Fifth Avenue and her evenings developing story ideas, eventually making a living as an independent journalist. When she met Bob at a sailing event, her life took another unexpected turn.

She put her writing career on hold and became heavily involved in politics and charity, rubbing shoulders with celebrities and top political figures. Mosbacher said she always planned to return to writing and began  to put her thoughts on paper in the wake of her
husband’s death.

“At first I thought it was reading like a novel,” said Cristina Adams, the book’s editor. “My initial reaction was, ‘Seriously? There’s no way.’ But she had her own story to tell, and that’s what I thought was even more interesting.”

Soon after Bob’s death in 2010, Mica texted a picture of a Ferrari to her brother, a longtime driver and the founder of charity racing team Godstone Ranch Motorsports.

“She said, ‘What kind of car is this? This is the most fantastic car I’ve ever seen,’” McCutchen said. “I said, ‘Look, I have never in my life heard you excited about any automobile. I think you ought to go to the Ferrari dealership and buy it.’ And she did.”

At the time, Mosbacher’s personal car was 10 years old, and she was afraid of driving fast. She began to test out the Ferrari on the track, eventually gunning the engine to 160 miles per hour. She is now taking classes to compete in sanctioned races.

“It gave me a new purpose in life,” Mosbacher said. “Life goes by so quickly. Don’t get so consumed in your everyday career and your life that you don’t do anything that you’ve always wanted to do.”

With plans to continue racing, participating in charity and perhaps learn a new instrument, Mosbacher said she does not anticipate slowing down.

“I have decided that my life will always be controlled chaos,” Mosbacher said “I feel an obligation to give back and help other people.”