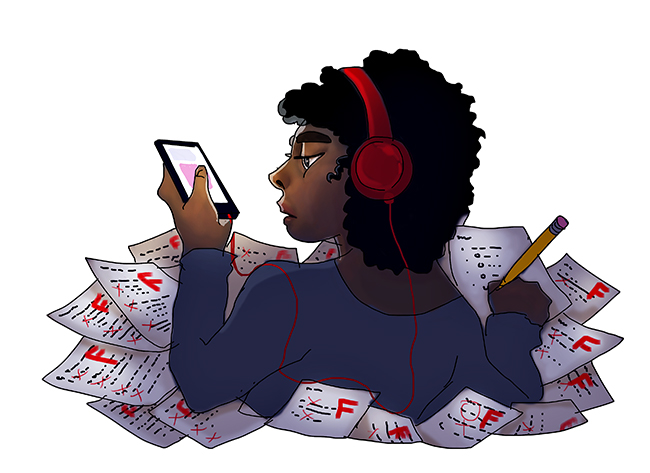 Constant notifications from texts, emails and Facebook might be responsible for students’ poor grades. Those struggling to pass may benefit the most from turning off their phones.

UT assistant economics professor Richard Murphy, and colleague Louis-Philippe Beland surveyed academic performance in 91 British schools before and after cell phone bans. They defined a ban as complete prohibition of cell phones from campus or an enforced roundup of cell phones at the beginning of the school day.

They found that the cell phone bans caused high-stakes test scores to increase slightly across the whole student population — about the same increase as administrators could expect with the addition of five more days of school.

However, the grade improvement was not equal between students of different backgrounds and achievement levels. High-achieving students were not significantly affected by the cell phone bans, but students in the lowest quartile of their class improved more than twice as much as average. Students in special education and free and reduced lunch programs also experienced higher-than-average gains.

“Maybe these students have higher cost of self-control, and therefore phones can be very distracting,” Murphy said. “Maybe higher-ability students find it easier to self-discipline and are therefore less likely to be distracted.”

Murphy’s study measured cell phone bans from 2001 to 2011. Since then, new apps such as Snapchat have only increased cell phones’ ability to defeat student motivation.

Although Murphy’s study was done on high school students, other studies confirm that college students have not outgrown their propensity to be distracted by cell phones. When students check
Facebook or text while studying, they don’t learn the material as well and end up with lower overall GPAs, according to a study in the journal Computers & Education.

The use and disadvantages of cell phones may not be spread equally among American college students, just as they were not equivalent across British high school populations in Murphy’s study. There may be a discrepancy around how much different groups of college students use cell phones. Women, African-Americans and students in the highest income bracket spent the most time talking on the phone and sent the most text messages, according to a study done in the journal Cyberpsychology, Behavior, and Social Networking.

Murphy does not ban phones in his own classroom, despite the results of his study. He said he trusts that his students will be self-disciplined enough to monitor their own cell phone use.

“Students at UT are pretty respectful,” Murphy said. “No one’s forcing you to go to class.”

College students must handle the responsibility of managing their own time and resources, which often means making sure cell phones don’t distract from study time. This may take more effort than switching phones to silent mode — students may need to keep them completely out of sight. College students did worse on complex performance tasks when they could see a phone, even if the phone was off, according to a study in the journal Social Psychology.

“The presence of phones does impede learning, so maybe when you’re studying you don’t want to be constantly checking your phone,” Murphy said.