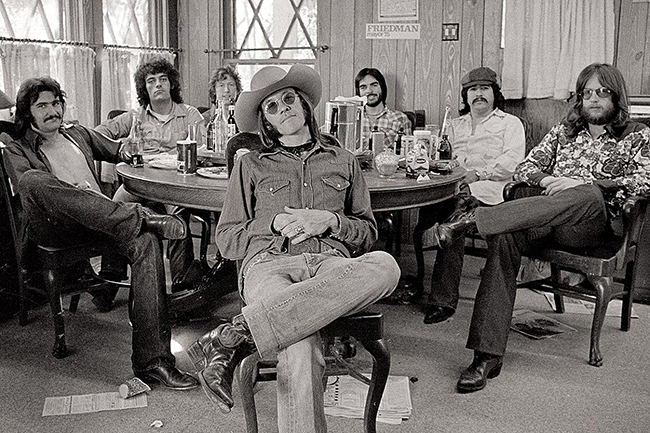 During Joe Nick Patoski’s many decades as a journalist capturing the lives of Texas legends such as Selena and Willie Nelson, the UT alumnus feared that one story would get away.

That story belonged to the late musician Doug Sahm, an Austinite whose legacy left a lasting impact on the Texas music scene. Patoski’s publishers rejected his initial idea for a Sahm biography as too obscure.

In Patoski’s directorial debut documentary, “Sir Doug and the Genuine Texas Cosmic Groove,” he captures the adventurous life of the diverse artist, who Patoski said he sees as a largely unsung hero of Texas music. The film screens Thursday at the Bullock Texas State History Museum as part of the museum’s Texas Focus film series.

The documentary traces back to Sahm’s roots in San Antonio as a child prodigy, following his participation in the British Invasion with the hit song “She’s About A Mover,” as well as his time in San Francisco during the Summer of Love and eventual return to Texas. Patoski said a film, rather than a book, ended up being a better fit for capturing the larger-than-life tale.

“I think this is just a great, wild, almost unbelievable you-can’t-make-stories-like-this-up tale,” Patoski said. “He’s Forrest Gump in American music, but this Forest Gump happens to be one of the most talented, authentic individual musicians that I’ve ever come across. I just wanted to tell that story.”

Patoski met Sahm after moving to Austin in the 1970s and attending his shows at historic Austin venues including Soap Creek Saloon and the Armadillo World Headquarters. Patoski formed close ties with Sahm’s family, including his son Shawn Sahm, a major collaborator in the documentary.

UT alumnus and “Sir Doug” producer Dawn Johnson said he was interested in making a documentary about Sahm for 10 years before the project began. Johnson said Patoski’s experience with Texas storytelling, as well as his established relationship with the Sahm family, allowed him to effectively tell the story.

“He’s from Texas, and he is just sort of pure Texas,” Johnson said. “He knows his landscape and he’s studied the culture of Texas for years through his writing. He has his own perspective on what makes Texas unique.”

The film debuted to a sold-out theater at this year’s South by Southwest festival, after which Patoski launched a Kickstarter campaign to gain the rights to the music and archival footage used in the film. The rights would allow him to show the the film outside of its current circuit of festivals and nonprofit events.

The campaign raised $90,000 for the cause. Johnnson said he hopes the funds will be combined with television revenues to release “Sir Doug” to wider audiences through Netflix and DVD. The Kickstarter page also included a petition to get Sahm into the Rock and Roll Hall of Fame. Patoski said he hopes Sahm will be nominated in 2016.

Radio-television-film professor Paul Stekler said he remembers hearing Sahm’s hit songs on the radio growing up. He said the documentary effectively covered the lesser-known parts of Sahm’s musical career, revealing the variety of genres and projects he took part in during his lifetime.

“It’s really nice when you’ve got a film that remembers somebody who you kind of remember fondly, but don’t know much about,” Stekler said. “Especially for those of us in Texas, it’s really nice to see the wide range and amount of music [Sahm] was part of and the fact that so many good musicians were touched by him.”

Patoski said he attributes Austin’s current status as a cultural center to the musical events of the 1970s involving Sahm. Patoski’s next project, a book on the history of Austin’s outsider culture, will continue his exploration into Austin’s cultural roots.

“He was the secret ingredient to what I call the Austin creation myth,” Patoski said. “There was always Austin and a music scene, but what happened here in the early 70s changed everything, and it informs the city that Austin is today. Everything that has happened since expanded from what Doug organized.”