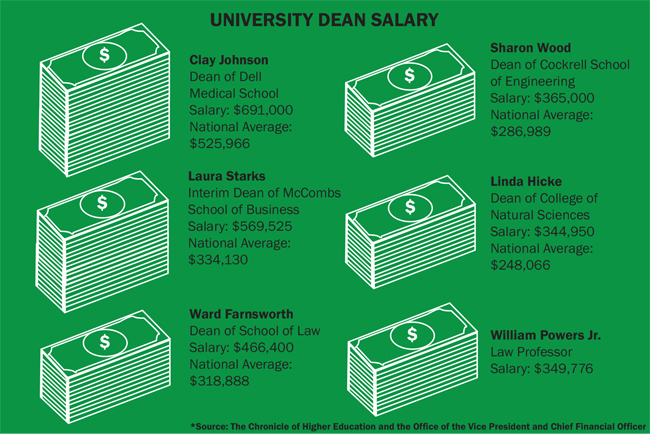 In a growing market that influences salaries of deans across the country, the average UT dean’s salary is still much greater.

A 2014 to 2015 report from the Chronicle of Higher Education shows national averages of college deans at research universities across the country, and UT deans’ salaries are above the average — Clay Johnston, the dean of Dell Medical School, makes $165,000 more than the average medical school dean, and the interim dean of the business school makes $235,000 more than the national average in her respective field.

Janet Dukerich, the senior vice provost of faculty affairs, said UT determines the deans’ salaries based on a combination of national market prices and considerations of previous salaries prior to coming to the University.

According to data collected by Mary Knight, UT’s vice president and chief financial officer, Johnston is the highest paid UT dean with a base salary of $691,000. The other deans that complete the list of the top five highest paid deans include Laura Starks, the interim dean in the McCombs School of Business; School of Law dean Ward Farnsworth; Sharon Wood, dean of the Cockrell School of Engineering; and Linda Hicke, dean of the College of Natural Sciences.

William Powers Jr., former UT president and part time professor in the School of Law, is earning $349,766 on a nine-month academic rate plus a summer salary. If Powers’ salary was ranked among the list of deans, he would be the fifth highest.

Officials at the School of Law declined to comment and said they do not have any authority in determining salaries.

Currently, the university is searching to fill three vacant dean positions in the McCombs School of Business, Moody College of Communications and the LBJ School of Public Affairs. Dukerich said a firm would be hired by the University to determine potential salaries once search committees fill open dean positions.

“For all of these high level searches, we will use a search consultant firm and that firm will help us find out what our market rates are for these kinds of positions,” Dukerich said. “When the president and provost begin the actual negotiations with the candidates, and where they are currently at will determine their salary. We certainly want to pay on par with the market in terms of our peer institutions.”

With UT’s plans to open a new medical school next summer, Dukerich said UT had to meet the market value in order to attract Johnston from his previous position at the University of San Francisco.

“Attracting someone who is highly capable [and] taking a risk coming to start a new medical school when you are attracting top talent — you can’t attract top talent if you are under market,” Dukerich said.

University spokesman J.B. Bird said some colleges have institutional funds in place to supplement a dean’s salary, but funding sources vary within each college.

“It is very so wildly connected,” Bird said. “A school like the Jackson School [of Geosciences], which has received the largest gift ever given to a public university, they have money in their foundation to supplement the dean salary. It is
so unique.”