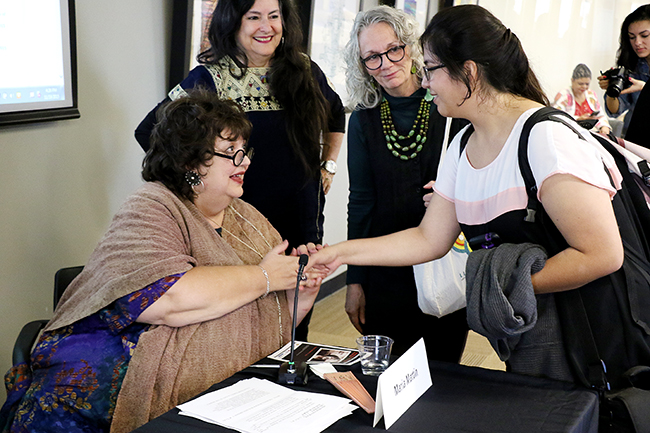 Maria Martin, NPR’s first Latino Affairs editor, expanded awareness of Latin-American experiences by covering events in Central America previously unreported by the media, according to a panel of journalists.

The panelists, including Martin herself, gathered on campus Thursday afternoon to celebrate Martin’s 40th anniversary of contributing to public radio, which included a discussion about Latino representation in the media.

Martin said her reporting on civil wars and issues in Guatemala has not been easy and is often met with resistance.

“The journalists I work with face danger daily from an entrenched system that does not want the reality of their corruption, their greed, or the tragic status that continues to cause so much pain, to come to light,” Martin said.
Mandalit del Barco, NPR Arts and Culture Correspondent and a panelist, said the number of Latino NPR reporters on-air has increased from three to six in the past 30 years.

“There is still only very few of us in the newsroom itself,” del Barco said. “For my career, I have always tried to straddle between representing being Latina and just being a journalist.”

Taryn Turner, history and art history freshman, said she believes cultural awareness is an important component to understanding the problems people in other countries face.

“A lot of people don’t know about [civil wars] in Central America, but we know so much about European wars and events,” Turner said. “The thing is we don’t know about the heritage of the people that are surrounding us today.”

Panelists discussed integration of Latino journalists and other minorities into the field, as well as increasing coverage of the Latin American community.

Martin said her position as editor in the early nineties allowed her to increase ethnic diversity in the public radio system while serving as a mentor for young journalists.

Associated Press reporter Russell Contreras, another panelist at the event, said he considers Martin a mentor and one of many Latina women journalists he feels paved the way for him to be able to focus on stories about Latinos themselves and not be inhibited by his race.

“These women have opened doors for me, they’ve taken the punches so that I can walk in and do my job better,” Contreras said. “But now with this upheaval, a lot of media executives know we’re coming, they know the changing demographics of this country, and they know they have to reach out to this population.”