Longhorns put loss to Washington behind them, focus on regaining normalcy against Texas A&M — Corpus Christi 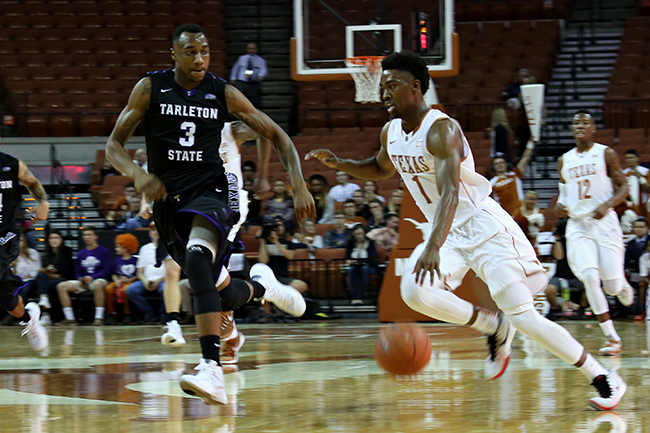 The last two weeks have been far from normal for the Longhorns.

They spent all last week in China, leading up to their 77-71 season-opening loss to Washington in Shanghai.

This week, the Longhorns focused on improving play on the court while repairing their broken sleep patterns.

“The first couple of nights were really interesting because you wake up at like 2 a.m. after having slept a couple of hours, and you’re just wide awake,” head coach Shaka Smart said. “Your body thinks it’s a nap, I guess.”

Texas will regain its sense of normalcy in the confines of the Frank Erwin Center against Texas A&M – Corpus Christi in its home opener Saturday at 7 p.m.

Junior guard Isaiah Taylor said strange circumstances or not, the Longhorns should have played better against Washington. He said the team is thrilled to be back in Austin to play a normal game at home.

Smart said he won’t make excuses for the Washington loss. He acknowledged the abnormality of playing overseas made it tough.

“If you just evaluate that 40 minutes, I’d give it a 2 out of 10,” Smart said. “The game wasn’t played in a vacuum — there’s the context of the trip and everything that went into it.”

The performance against Washington wasn’t what Smart hoped to see. Texas shot 26 percent from the field, 13.3 percent from three and missed 18 of 48 free throws. The Longhorns were also outrebounded 62-51.

“We’re going to do some of the same stuff [on Saturday],” senior center Cameron Ridley said. “It’s not that we were doing anything wrong. We just weren’t hitting shots – they just weren’t going in. I mean, we’re going to have nights like that.”

Smart said he doesn’t underestimate A&M — Corpus Christi. The Islanders — a Southland Conference team — won 20 games last year and advanced to the second round of the CollegeInsider.com Postseason Tournament.

“One thing that our group needs to continue to improve on is the way that we approach our opponents — no matter what it says on the front of their jerseys,” Smart said.

The game also marks the regional game for the Battle 4 Atlantis tournament in the Bahamas next week. Smart said their schedule won’t truly return to normal until afterward.

“In some ways, we have the [China] trip behind us now and we can kind of get going,” Smart said. “To be honest with you, really when we get back from the Bahamas we’ll really be able to hunker down, get in a routine and grow.”