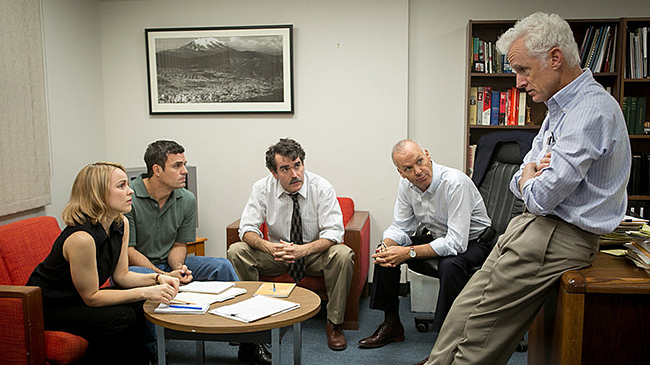 Director Thomas McCarthy’s “Spotlight” is a testament to courageous journalism’s importance, telling the story of how four reporters from The Boston Globe uncovered a massive sex scandal in Boston’s Catholic churches. Superbly written and acted, it is a culturally necessary film.

The movie begins with the Globe’s new editor Martin Baron (Liev Schreiber) reassigning the paper’s Spotlight unit, a team of investigative reporters, to follow up on a Globe column about molestation committed by priests. The Spotlight team, consisting of Walter Robinson (Michael Keaton), Michael Rezendes (Mark Ruffalo), Sacha Pfeiffer (Rachel McAdams) and Matt Carroll (Brian d’Arcy James), does not expect the investigation to be about anything more than a series of isolated incidents.

But the problem is far worse than they could have imagined. As they dive deeper, they discover up to 87 active priests in Boston may have sexually abused young children and had their crimes covered up by the Church.

It’s nearly impossible to watch the movie’s events unfold without feeling a sense of outrage as “Spotlight” explores the psychological toll the priests’ sins have wrought on their victims and the extent of the Church’s corruption. The reporters, driven by righteous anger, are unconventional yet likable heroes. They rely on brains and ingenuity to uncover the whole story, coaxing uncooperative sources to join their side and finding ways to get access to court-sealed documents.

“Spotlight” maintains tight focus on the reporters’ work, showing very little of their personal lives and relating their traits through their interactions with each other and with the victims, lawyers and priests they interview. Keaton’s Robinson is the team’s confident leader, McAdams’s Pfeiffer is the voice of compassion, and James’s Carroll dishes up the moments of levity needed in a film this serious.

Though everyone in the cast does a stellar job, the majority of the viewers will leave the film remembering Ruffalo’s Rezendes most. He is the team’s moral compass and its most compelling member, displaying enormous conviction in his quest for justice. As Rezendes, Ruffalo moves about with an awkward gait, hands often in his pockets, slightly slouching. His character is quiet and unassuming, which makes his emotional outburst midway through the film all the
more moving.

McCarthy’s assured direction and the script he co-wrote with Josh Singer keep the picture from drowning in melodrama.

He consistently reiterates the tragedy of the scandal without overdramatizing it, and keeps us locked into the story with a brisk narrative that starts off running and never looks back. He objectively approaches his characters, yet allows the audience to tap into their emotions. As a result, “Spotlight” is both calculatingly constructed and sensitively crafted.

McCarthy extends this sensitivity to the Catholic institution as well. “Spotlight” never attacks the idea of faith, and a few of the characters have some connection to it – Pfeiffer still attends church with her grandmother, and Rezendes feels he will start going again in the future. Their connection to their faith is shattered by the perversions they stumble upon, demonstrating that the Church’s corruption not only hurt its victims, but also its innocent followers. “Spotlight” is sympathetic to those Catholics, and to the faithful who’ve had to watch the humiliation of their institutions.

“Spotlight” is “All the President’s Men” for a new generation. It succeeds as a social commentary, morality play and entertaining piece of storytelling. It unveils how much evil can flourish when decent people turn a blind eye to its machinations, but ends on the optimistic note that just a few humble heroes can break its hold.